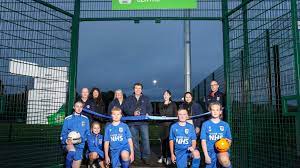 A state-of-the-art 3G pitch has been officially opened by Bury Football Foundation and Bury Council at Goshen Football Centre.

The new 3G pitch was made possible thanks to investment from the Premier League, The FA, the Government’s Football Foundation and Bury Council.

After netting a £524,054 grant from the Football Foundation, work begun on the site in early 2020 and was completed later the same year. Thanks to the easing of Covid-19 restrictions, the facility is now operating at full capacity. The new facility replaces the old sand-based pitch built in the 1980s.

The grant enabled Bury Football Foundation to provide a long-term sustainable home for the charity to provide all kinds of football activity for children and adults.

The new facility comprises a state-of the art full-size playing surface, replacing the old facilities that were taken out of the action by the floods caused by Storm Eva in 2015.

The site will be used by more than 350 members and volunteers of Bury Football Foundation across all age groups and demographics, including provision for walking football and disability football; local grassroots clubs; Bury school games for all interschool competitions throughout the year; the Bury Junior School Sports Association catering for primary schools football development; and many more. All provision on site will support the Football Development Plan to grow participation for all.

The charity worked in partnership with the Lancashire FA to secure the Football Foundation funding, and with Bury Council who contributed £180,000 towards the project.

Alison Warwood, trustee of Bury Football Foundation, said: “We would like to thank the leadership of Bury Council for their unwavering support, without whom the project would not have happened. Thank you to the Premier League, the FA and everyone who has helped to achieve a sustainable and long-term future for the site as a whole and with it the development of football across the borough.”

“Good quality facilities support the health of local people and communities, which is why we’re investing in projects like this across the country with funding provided by the Premier League, the FA, the Government and Sport England.”