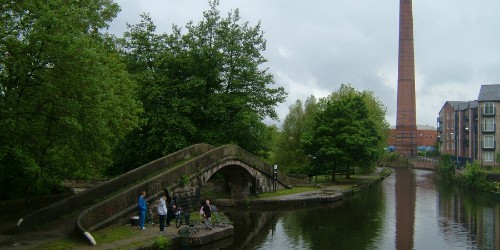 A mother and son were attacked by a man with a metal bar on the Ashton Canal in Denton yesterday evening.

A man –aged approximately 18/19 and wielding a metal bar, attacked a 29-year-old woman and her six-year-old child after they had had picnic on a field near to the Ashton canal in Denton situated closely to the A57.

The man repeatedly hit the woman with the bar and also her son, who thankfully managed to run off to the canal tow path. The male was last seen making off along the field in the direction of the River Tame

The offender is described as a White man, 18/19 years old and between 5’8-5’9 inches tall. His build is described as skinny. He had light coloured hair and was clean shaven.

He was wearing no top but had black shorts on covering to just above the knee. He had a Black Nike rucksack and also a drawstring type bag

The victim and son attended hospital and received treatment from hospital staff. They have since been discharged.

Detective Sergeant Wayne Marshall, of GMP’s Tameside division, said: “This is a very worrying attack by a random man in pure daylight on a mother and son who were enjoying themselves in the nice weather by the canal and I am committed that they get justice.

“For someone to demonstrate such levels of brutality and audacity in this way is shocking and I am determined to ensure that we catch whoever is responsible for this attack and stop them from offending again.

“No one should be subjected to such a disgraceful and unprovoked incident and I am committed to prevent any other members of the public from becoming further victims of this very violent man.”

“This would’ve been a busy time of day and it is vital that any witnesses of this incident come forward with any information they have; even if you just recognise the description of the offender then please get in touch and assist our enquiries.”