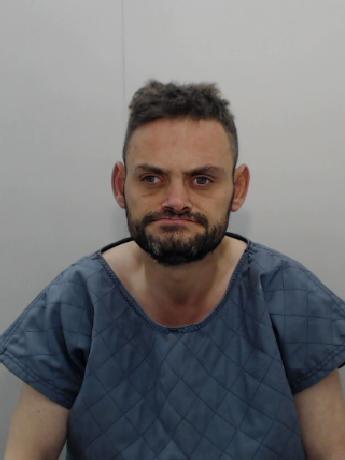 A heroic police officer managed to detain a violent offender despite being hit over the head three times with a bottle of wine.

In a victim statement read out today in court, she thanked the members of public who came to her aid – saying that their assistance reminded her of why she has spent more than two decades as a front-line officer, protecting communities.

Robertson aged 39 of HMP Manchester, formerly of Floral Court, Salford had consumed a cocktail of alcohol before being seen on St Mary’s Road, Moston attempting to grab female members of the public as they walked past.

PC Aitken responded and while approaching Robertson asked him to lower the bottle of wine in his hand.Instead, he raised the bottle and struck her on the back of the head.

Despite being hit two more times, PC Aitken was able to draw her baton and strike Robertson’s legs.Robertson attempted to run away, but PC Aitken then rugby tackled him to the ground.He was restrained on the floor with help from members of the public before further patrols arrived and he was arrested.

In interview, Robertson said he’d consumed a mixture of alcohol including strong cider, lager and two bottles of wine.

In a victim statement to court, PC Aitken, who has been a police officer in Manchester for more than 20 years, said: “I have always taken pride in the fact that prior to this incident I have never had to use my baton.

“I have dealt with countless volatile situations, but have always managed them without resorting to such means.

“The simple fact is that this was a vicious unprovoked attack with no warning given.

“It was the middle of the day. I approached the male calmly and politely. There were clearly people watching, yet he was still capable of hitting me forcibly and repeatedly over the head with a large bottle containing liquid, and would have continued to try and hurt me had the members of the public not run to my aid.

“It begs the question of what he would have been capable of had this been in a more secluded area with no witnesses.

“I made the decision to return to duty after three weeks off, despite not being fully over my injuries, just to show that people like him cannot win.

“I am so very grateful to the members of the public who came to my assistance – they have reinforced why I do the job I do. These are the people I am trying to protect.”

“While we are immensely proud of PC Aitken and grateful to members of the public who came to her aid – it’s disappointing that I have to stand here to talk about an officer, colleague and friend being assaulted.

“The overwhelming majority of the general public appreciate that the police are here to help and support them.

“Unfortunately, a small minority such as Robertson seem to consider it acceptable to use force against the very people who keep the public safe.

“Officers are people like you and I, who have sworn to protect others. Being assaulted in the line of duty should never be accepted or normalised as simply part of the job.

“Since November, police have new powers under The Assaults on Emergency Workers (Offences) Act to charge people who attack officers.

“These powers allow courts to impose longer sentences for offenders. We won’t hesitate to use these new powers if our officers are attacked.”

In a separate statement, the Chief Constable of Greater Manchester Police, Ian Hopkins, said: “It is never acceptable to assume that assaults upon police officers and staff should be tolerated. They are not simply ‘part of the job’.”

He added: “Most importantly it should be remembered that police officers and staff are people. They are fathers, mothers, sons and daughters. When they are attacked they become victims just like any other, but victims who have been attacked while trying to protect others.”

Four years on and detectives are continuing to investigate the tragic death of Eileen...