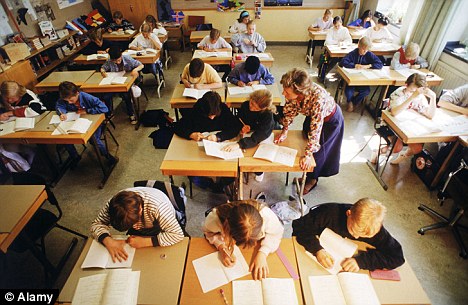 Labour today publishes analysis of overcrowding in English primary schools with more than half a million pupils being taught in super-size classes.

It reveals that across the UK, 542,679 children are now in super-size classes in primary school, as class-sizes continue to rise

The mounting pressure on school places is now starting to hit secondary schools, with figures showing an increase in the number of pupils in very large classes in the last year

While The North West is one of the worst hit areas with latest figures showing over 92,000 primary school pupils in classes over 30

The number of infant school children (between the age of 5 and 7 years) in classes over 30 has almost trebled since 2010 says the report.

“These figures expose seven years of Tory failure in our schools. The number of pupils being taught in super-sized classes is skyrocketing while schools face the first real terms cuts to their budgets in a generation.

“This situation is unsustainable. If the Tories wanted to give every child the education they deserve they would ensure that children were not crammed into super-sized classes.

“A Labour Government would ensure that schools are built where they are needed, and cap class sizes at 30 for all primary school pupils.”

Latest-Schools to shut from Friday until further notice