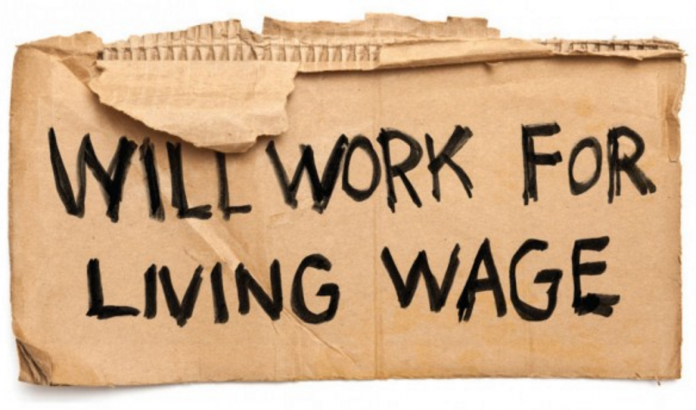 Some 5.6 million people in the UK are paid less than the voluntary Living Wage, constituting 22 percent of all working people, according to new estimates published by KPMG with the North west one of the most effected areas.

The proportion of employees earning less than the voluntary Living Wage has risen steadily from 19 percent in 2012, 22 percent in 2016, a 1.1 million increase.

The total number of people earning below the Living Wage today does not differ tremendously from figures published last year, however it is still considerably higher than four years ago.

The research, conducted by Markit for KPMG, reveals that part-time jobs are three times more likely to pay below £8.25 per hour (or £9.40 in London) than full-time roles. Around 43 percent of part-time workers now earn less than the voluntary Living Wage, compared with around one-in-seven full-time workers (14 percent). Indeed the difference is so stark that despite accounting for less than one-third of all UK jobs, there are more part-time roles paying less than the Living Wage (3.1 million) than full-time jobs (2.5 million).

“Today’s figures show that much more needs to be done if we are to eradicate in-work poverty. The reality is that more than 5 million working people in the UK are only earning enough to ‘get by’ and cannot enjoy the standard of life so many of us take for granted.

“Previously many businesses worried that increased wages hit their bottom line, but there is ample evidence to suggest the opposite. By paying the Living Wage we have seen improved staff morale, a rise in service standards, improved retention of staff and increased productivity.

“It is clear that it may not be possible or practical for everyone, but all organisations need to do what they can to address the problem of low pay. Of course, change cannot happen instantly, but making an initial assessment is an important first step.”

“Today’s report shows that there are still millions of people who don’t earn enough to make ends meet, and many who feel that their finances are getting worse not better. That’s why the need for employers to go further than the government minimum to ensure their employees earn a real Living Wage is as important as ever. Tomorrow we’ll find out the new rates for the real Living Wage in London and the UK – leading to a pay rise for well over a hundred thousand workers in the nearly 3,000 companies that voluntarily commit to ensure their staff earn a wage they can really live on.”

Delight as residents will no longer have to pay to remove Grenfell type cladding...

Warning to commuters to plan ahead for Friday’s rail strike