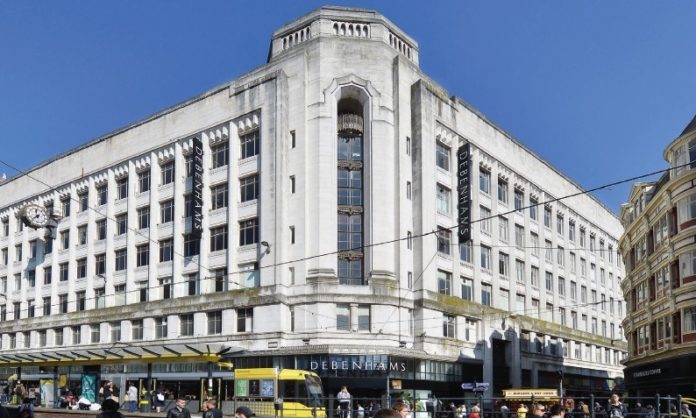 More than fifty Debenhams stores face closure after the retailer was put into administration today and effectively taken over by its lenders.

The move comes less than twenty four hours after an offer by Mike Ashley’s Sports Direct – which owned 30% of the business was rejected.

Stores will  continue to trade as normal for now – though dozens are already facing closure – but shareholders including Sports Direct will be wiped out.

A statement from The administrators said: “The transaction included provisions to ensure that the Group is immediately marketed for onward sale.”

Debenhams currently employs over 25,000 people.The group which had Ben negotiating with landlords over rents has not yet released a list of which shops may be shut.

“The cash injection from the new owners will not be enough to turn around the failing department store’s fortunes. Although Sergio Bucher’s Redesigned strategy, announced almost two years ago, addresses the retailer’s problem areas, it has not been rolled out fast enough and as a result most consumers have seen little change at Debenhams, other than a minor adjustment to its logo.

“Following weeks of bickering with Sports Direct, Debenhams has escaped the hands of Mike Ashley with any plans for a ‘House of Debenhams’ now firmly up in smoke. Given the changes to House of Fraser since its acquisition by Sports Direct in August 2018 with stores looking empty of both stock and shoppers, Debenhams has indeed been rescued by lenders – though store closures are inevitable. The business will still require significant investment to stand a chance of regaining consumer interest.

“At the time of announcing its H1 results in March, Debenhams expected to shutter 50 stores in the medium term and it is likely that the new owners will accelerate this plan. With the majority of Debenhams’ sales generated from its clothing division, its competitors must be ready to take advantage and swoop in to capture the physical spend that Debenhams will miss out on.

“With Marks & Spencer’s clothing offer remaining unappealing, Next and Primark are best positioned to benefit from Debenhams shutting locations. Store closures would not bode well for the struggling Arcadia group with many of its brands being present in Debenhams branches and the department store retailer being a significant contributor to the fashion group’s revenue.”