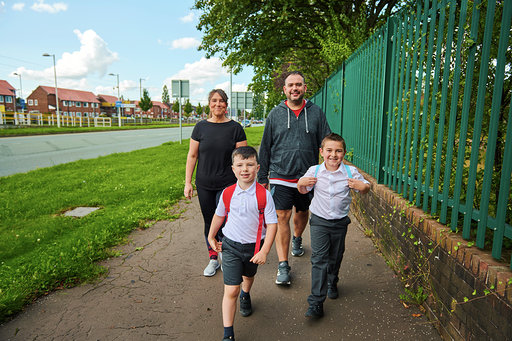 A major campaign is launching in Greater Manchester to get people thinking differently about getting active, and help the 6-in-10 children and more than a third of adults who aren’t moving enough.

Starring people from across Greater Manchester, the That Counts! campaign kicks-off as the region returns to routine after the summer break. It’s supporting people to move more in a way that suits them, giving a clear daily active movement target (30 minutes) to start aiming for. Everything will count, from walking to school to dancing while doing the vacuuming, and getting off the bus a stop early after coming back from the shops.

The campaign’s central message is that moving for just 30 minutes a day can be fun, social and bring loads of benefits, like feeling happier, more confident and sleeping well, as well as helping towards long-term health.

Sport England chose Greater Manchester to work on the new approach to help build healthier, more active communities across the country. Fuelled by £10m funding, it is the biggest of a series of regionally-created initiatives and the only one happening in the North West

Levels of activity in Greater Manchester have trailed behind the national and North West average, but the That Counts! community-focused campaign aims to change that.

Latest official statistics show Greater Manchester has higher inactivity levels than both the North West and England averages, with more than one-in-four adults active for less than 30 minutes a week, despite about 30 minutes a day recommended.

Worryingly, one-in-three young people is active for less than 30 minutes a day, despite an hour a day being advised for ‘active’ 5 to 16 year olds

One of the local stars of That Counts is 33-year-old Laura Noden from Wythenshawe, who transformed her life following the birth of her son James, now five. Being unfit and overweight meant Laura struggled when James was a baby. But with support to make small changes in her life, moving more and changing her diet, Laura shed the pounds and can now show her son how easy it is to lead a healthy lifestyle.

She said: “I’ve had to go the long way around to get active – I got very big before I realised I needed to make a change. But I’m eager for people to understand how small changes can have such a big effect on your health. You don’t need to become a marathon runner or fitness fanatic, but if we teach our kids to make the right decisions in their day-to-day lives, they have a much better chance of growing up to be healthy adults. Heading to the park, walking to work, taking the stairs – all these things give us options to get moving more. It’s important for the next generation, like James, to have this kind of lesson instilled in them from the start.”

Only one-in-five children is active enough outside school and almost a quarter of pupils start school overweight – increasing to more than one-in-three when leaving primary school. Both rates are much higher than the rest of the country

However, studies show an appetite among GM residents to do more and two-thirds of locals want to be more active. Many are finding it difficult to move enough in their everyday lives though, with one in four  not having enough time, nearly a third feeling too tired and more than a quarter  put off by the weather5.

The campaign has the backing of Greater Manchester Mayor Andy Burnham, who said: “Greater Manchester residents are already taking great strides to become more active – and we’re tackling inactivity three times faster than the national average. We’ve got a lot to celebrate, but there’s still some way to go and barriers we can start to tackle as a community. That Counts! is an active, engaging and fun campaign that shows it doesn’t matter what you do, or how you do it, there are loads of ways to make movement count.”

That Counts! will be seen across the city and in all 10 boroughs of Greater Manchester, including local neighbourhoods, shopping centres and transport networks, with organisations large and small are being encouraged to help deliver the message. The campaign is taking to social media too @ThatCountsGM (Instagram and Facebook), so the community can share ways to get more active in everyday life across.

There will also be ultra-local pilot community initiatives running throughout Bolton, Bury, Manchester, Oldham, Rochdale, Salford, Stockport, Tameside, Trafford and Wigan, with each of the boroughs helping to create a blueprint for increased activity levels.

GM Moving’s work is an important part of the city-region’s population health plan to improve health and reduce inequalities for residents by 2021.

It will reduce the numbers of people dying early and suffering serious poor health, help strengthen our communities, improve our environment and boost our economy. We are already seeing positive changes, but know there is much more to do. Our That Counts! campaign is an important next step in making movement part of our daily lives.”