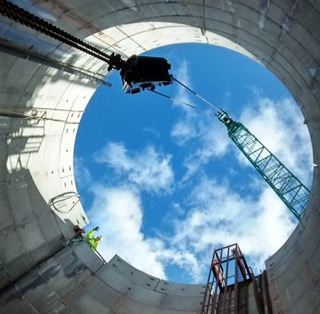 It’s the biggest emergency sewer repair United Utilities has ever undertaken but now the Mancunian way is set to reopen on the 15th June.

10,400 tonnes of sandstone has been excavated, the equivalent of 3,992 Olympic-sized swimming pools of sewage have been pumped past the roadworks

400 metres of temporary pipework has been laid and three of the largest mobile pumps in the UK have been used – each one foot in diameter and capable of shifting 500 litres of wastewater a second, 24 hours a day have been used.

The contraflow section has been in operation on a short section of the road between London Road and Fairfield Road since August when a huge sinkhole appeared after heavy rain, causing major damage to a key sewer.

United Utilities has now completed a £6 million tunnelling project to lay a new sewer and is carrying out further replacement highway drainage work and resurfacing on behalf of Manchester City Council.

As a final step before the reopening, the whole of the Mancunian Way will need to be closed on Monday 13 and Tuesday 14 June for its annual maintenance inspection and to remove the contraflow system and repaint road markings.

This is an annual inspection closure which was scheduled to happen earlier this year but postponed while the repair work was still taking place to avoid further inconvenience to motorists.

Councillor Kate Chappell, Executive Member for Environment for Manchester City Council, said: “It’s great news that we have got a date for the reopening. We’d like to thank the public for bearing with us during this challenging work.

“As the damage affected a major sewer there was no alternative but for United Utilities to carry out this complex large-scale repair deep underground otherwise large parts of East Manchester would have been left without a functioning sewage system.

“It’s great news that United Utilities have carried out this difficult repair without disruption to water and sewage network and we appreciate all their hard work.”

18 year old jailed for life after deliberately driving his car into victim on...