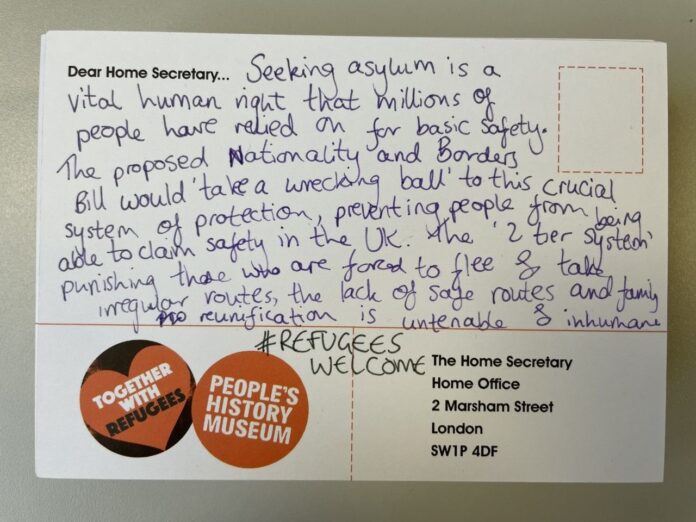 People’s History Museum (PHM) is using Human Rights Day (10 December) to amplify its efforts to encourage the government to rethink its approach to refugees and the changes that are proposed under the Nationality and Borders Bill.

Adopted on 10 December 1948 the Universal Declaration of Human Rights (UDHR) created the guiding principles to every individual’s rights as a human being and today Human Rights Day reminds us of how precious these rights are.

Human Rights Day in 2021 takes on additional significance in the UK because the changes proposed by the government on how asylum seekers could be treated under the Nationality and Borders Bill threaten to undermine the UDHR’s core proclamation that recognises equality of all. Furthermore, if the Nationality and Borders Bill passes into law it will profoundly undermine the UK’s commitment to the 1951 Refugee Convention.

People’s History Museum has joined the Together With Refugees coalition, formed by organisations from across the UK who all believe that how we treat refugees is about who we are and that the treatment of refugees should be effective, fair and humane. As well as using its platform as the national museum of democracy, People’s History Museum is inviting people to share their voices. Visitors to the museum will be able to find out more about its #AntiRefugeeBill campaign and fill in a Together With Refugees postcard that it will send to the Home Secretary.

The words already shared by visitors powerfully sum up feelings that PHM urges the government not to overlook:

“Nobody entrusts themselves and their precious children to a leaky boat unless living on the land has become so dangerous and brutal that there is no other choice.”

“Everyone should be free to seek asylum. The proposed borders bill will endanger people who have no safe route to asylum. We should be helping these people, not harming them further.”

“All seeking refuge should be treated with dignity and respect. No detention, access to education and permission to work for all. We must work internationally to support refugees.”

“I’m not a British citizen but I’d like to say that even in Brazil (!) we know about the Bill and we cannot believe that such a country like Britain would make something so humanless, cruel and heartless. Please reconsider the example you give to the world!!!”

Jenny Mabbott, Head of Collections & Engagement at People’s History Museum, says, “The proposed changes to the Nationality & Borders Bill fail to consider the people whose lives it will affect; some of the most vulnerable people in the world who are facing the most challenging circumstances imaginable. We want people to be put at the heart of how our nation approaches refugees and to remind government of the importance of advancing human rights, not going back on principles that have stood as a guiding light for decades. The proposed legislation will create a discriminatory two-tier system that judges an asylum seeker on the route they take to the UK, not why they came here. It threatens to criminalise those who are seeking asylum as part of their legal right under international law and to use ‘off shore’ processing centres and out of town institutions to house refugees which we believe would be inhumane.

“Over the last three years a central part of our work as the national museum of democracy has focused upon the experiences of migrants and the results of this can be seen throughout our exhibitions and visitor activities. These moving stories remind us of the people whose lives are affected by legislation, of the power of positive action and that we should always take a human rights led approach in all that we do.”