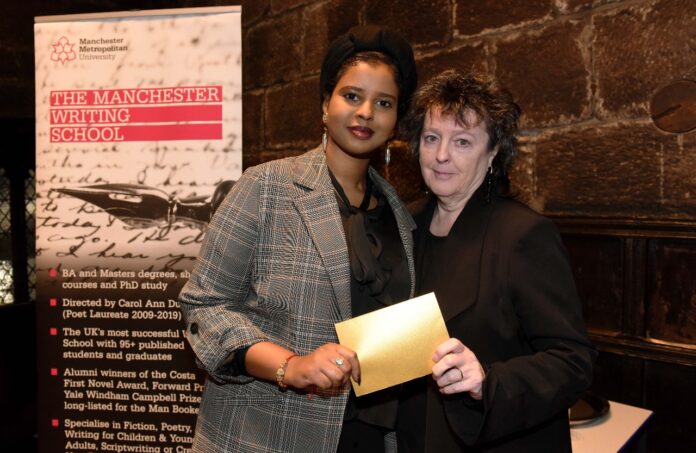 Two international shortlists have been revealed for the Manchester Fiction Prize and Manchester Poetry Prize, which together make up the Manchester Writing Competition 2020, the UK’s biggest awards for unpublished writing.

Since the former poet laureate Carol Ann Duffy launched the prizes in 2008 they have helped to accelerate the careers of several new and emerging writers who have gone on to become big literary names and rising stars, including Mona Arshi, Helen Mort, Alison Moore, Pascale Petit and Martin MacInnes.

The awards are organised by the Manchester Writing School at Manchester Metropolitan University, where Carol Ann is Creative Director.

The winner of each prize receives £10,000. This year will see the total prize money given out to winners pass £200,000. Poetry Prize finalists are judged on three to five unpublished poems, while Fiction Prize entrants submitted a short story of up to 2,500 words.

The two six-strong shortlists for the 2020 Manchester Writing Competition span the UK, Ireland and USA, and include multiple award-winning poets and writers, an actor and playwright, and the leader of a writing for wellbeing course for NHS staff and key workers during the first COVID lockdown.

In a year marked by the COVID-19 pandemic, many submissions touched on themes relating to lockdown, isolation and loss.

The Manchester Fiction Prize 2020 judging panel is chaired by novelist and short story writer Nicholas Royle, while the Poetry Prize panel is headed up by poet Malika Booker, who recently won the Forward Prize for Best Single Poem.

he Manchester Fiction Prize 2020 judging panel is chaired by novelist and short story writer Nicholas Royle, while the Poetry Prize panel is headed up by poet Malika Booker, who recently won the Forward Prize for Best Single Poem.

They were joined in the Poetry Prize category by Arshi (2014 winner) and Mimi Khalvati, and for the Fiction Prize 2019 winner Tim Etchells and Irenosen Okojie.

Royle, Reader in Creative Writing at Manchester Metropolitan, said: “We were expecting a lot of stories about isolation, disease and lockdown, and we got them, from the explicit and straightforward to the wildly imaginative. There were also, perhaps not surprisingly given the make-up of the judging panel, more experimental approaches to narrative than we usually see. We found ourselves drawn to stories that repaid repeat readings and still managed to retain mystery.”

Booker said: “The pandemic seems to have given poets permission to tackle and submit ambitious poems grappling with grief as well as addressing difficult social, environmental and political themes. We were drawn to poems that were grappling with difficult terrain, imagistically lush, and formally skilful.”

The Manchester Writing Competition has had 26 winners and dozens of other shortlisted writers through its history, with submissions from over 80 countries. The 2019 Fiction Prize was won by Tim Etchells, while Momtaza Mehri won the Poetry Prize.

The prizes are crucial in supporting emerging writers to get a foothold in the industry, providing winners with some financial security to focus on writing full-time, attract literary agents and get novels or collections published.