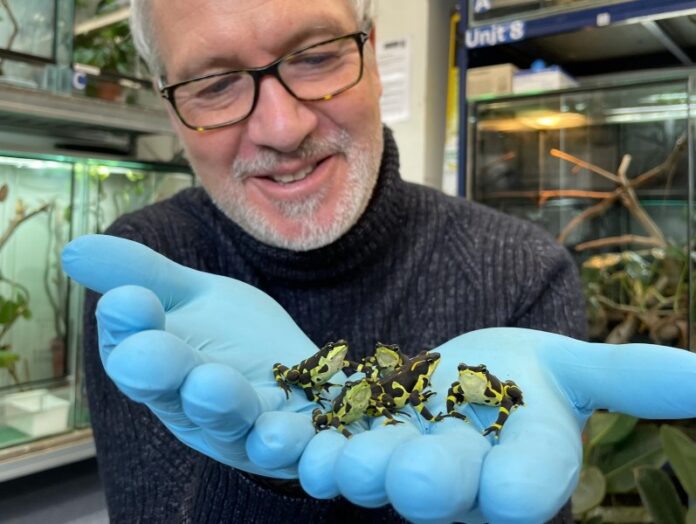 One of the world’s rarest toads has been successfully bred in captivity for the first time outside its country of origin by scientists at Manchester Museum, part of The University of Manchester.

The team recreated the exact conditions the critically endangered Variable Harlequin Toad – that lives in Panama in Central America – enjoys in the wild to achieve the success.

The breeding –the first outside Panama – is the culmination of 3 years of painstaking work since 6 precious toad specimens – also known as Atelopus varius – arrived at the Museum in 2018 from the Central American country.

It is collaboration between Panama Wildlife Charity PWCC, Manchester Museum, and the Faculty of Medicine, Biology and Heath at The University of Manchester.

The work with the critically endangered toads are a key part of a project which combines non-invasive research and conservation education involving local communities in the Santa Fe National Park in Panama.

The Manchester Museum’s Vivarium team, who are world renowned experts in amphibian husbandry, mimicked the turbulent tropical stream with boulders and rocks, where the toad lays its eggs.

They monitored their amphibians’ native habitat closely to gain baseline data so they could recreate the correct temperatures, water levels, flow, and lighting.

The special lighting allowed a specific species of tropical algae to grow in the museum’s aquarium, a key condition for successfully rearing of the tadpoles

Curator of Herpetology at the museum, Andrew Gray explained: “These rare toads usually live deep in the rainforest and only go to the streams to breed under very specific conditions, so it was vital we were able to recreate them.

“Tropical algae are the only things these tadpoles eat off submerged rocks, because they have specialised, sucker-like mouthparts. So it was essential we were able to grow it in the aquarium.

“The adults can stay underwater for very long periods before breeding and were in the aquarium for over a month.

“We were very nervous about putting them in such deep water but they walked along the bottom just like they were walking on land; it was unbelievable.”

The museum was invited by the Panamanian authorities to keep and breed the toads to highlight their conservation needs and provide a back-up population in case they become extinct.

He added: “The University is the only institution outside Panama to house these toads; it’s a huge responsibility the team do not take lightly. So we’re over the moon we’ve achieved the first captive breeding of this remarkable species.

“Our success heralds the next chapter for more innovative amphibian conservation work.”

Professor Amanda Bamford from The University of Manchester worked with the team in Panama.

She said: “This is a fabulous project, especially as Atelopus toads are one of the most highly endangered groups of amphibians on the planet.

“I’m particularly proud of our collaboration with our Panamanian conservationist colleagues, which involves training local people as co-researchers and providing educational resources to local schoolchildren in the area.

“I feel this project uniquely involves research, education and community involvement and is a beacon for such conservation initiatives.”

Dr Luis Urena, Director of PWCC said: “Looking after our global biodiversity must be a top priority for all citizens in this world. We are proud to use the conservation of the Harlequin toad of Panama as an example of the positive difference we can make.”