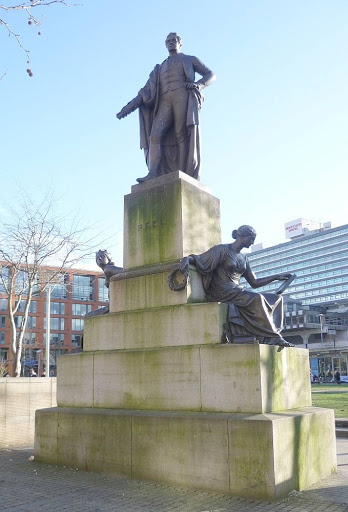 Manchester City Council has committed to a full review of the city’s statues in response to the Black Lives Matter protests across the UK this week.

The move follows events at the weekend that saw the statue of Edward Colston torn down in Bristol and thrown in the river and the statue to Winston Churchill in London defaced.

Some people meanwhile are calling for the Statue of Robert Peel in Manchester to be removed from Piccadilly Gardens.

Peel who originated in Bury was Prime Minister in the 1840’s and was behind the repeal of the Corn Laws which saw Manchester at its centre.However campaigners saw that his family dynasty was founded on the slave trade.

His father the first baronet Peel gave a speech in Parliament warning that dangerous consequences would befall the colonies as a result of abolitionism, and inferred that Africans were contented slaves.

In 1806 he raised a petition in opposition to the Foreign Slave Trade Abolition Bill which he saw as a threat to the cotton industry and merchants’ trade interests.

Councillor Luthfur Rahman said: “The weight of emotion around the symbolism attached to public statues has been palpable this week – and not without good reason.

However, it is also true to say that most of us do not know the people represented in the city’s statues, nor the history as to why they were chosen.

We think it’s important therefore to undertake a city-wide review of all the statues in Manchester and work with our cultural institutions to understand their history and context.