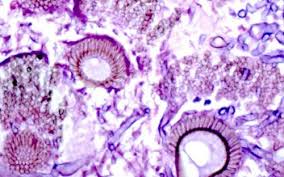 A team at The University of Manchester have found that in a minority of patients they studied, a standard treatment for asthma – oral steroids – was associated with increased levels of the treatable mould Aspergillus in the lung.

The findings could be of valuable help to asthmatics who endure severe and difficult to treat symptoms, by giving doctors the information they need to plan their care more effectively.

The team stress there is no danger to asthmatics from steroid therapy and that patients should continue taking their steroid inhalers or tablets as prescribed.

About 40% of people with severe asthma have allergies to Aspergillus in their lungs.

The research showed that severe asthmatics with allergies were ten times more likely to carry higher levels of mould when on corticosteroid treatment.

Individuals in the study receiving antifungal therapy had lower quantities of the mould in the lung; the fungal load was much higher if the therapy had been stopped.

“Aspergillus infection is usually treatable, but might be able to explain why some asthmatic patients are having persistent symptoms on steroids,” said Dr Paul Bowyer, senior author on the study from The University of Manchester.

“We stress there is no danger to any individuals taking steroids to alleviate their asthma.

“But nevertheless this data is important because it may help doctors to consider additional treatments to individuals with allergies to this mould associated with steroids, so they may be helped more effectively.”

Dr Bowyer and Dr Livingstone Chisimba, also from The University of Manchester and colleagues from Manchester University NHS Foundation Trust examined the airways of 48 people with mild to severe asthma, and 10 volunteers with no symptoms.

Dr Chisimba said: “With higher Aspergillus loads seen in those on oral steroids, we believe these data combined with genetic or other biological markers of asthma will uncover a fundamental understanding of the role of the fungal infections in asthma.

“This is a telling finding.”

Though different fungi were found with variation between individuals, the most common was Aspergillus.

Multiple different isolated spores of the mould were detected in the same lung, possibly, say the team, because excess mucus – a characteristic feature of asthma – acts as an efficient spore trap.

That, they explain, allows the spores from inhaled air to accumulate . Excess mucus is able to protect Aspergillus from the body’s normal defences, they say.

The research is published in the Journal of Allergy and Clinical Immunology.

Booster jabs give the best protection against Omicron variant