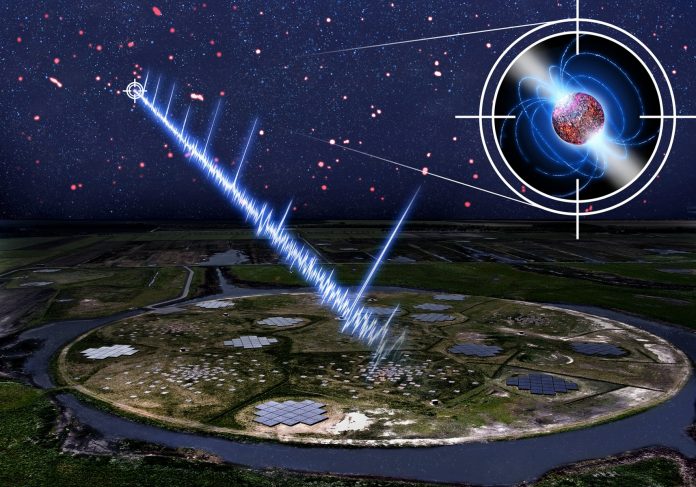 An approximately 14 million year old pulsar star that is the “slowest-spinning” of its kind ever identified has been discovered by a PhD student from The University of Manchester.

Chia Min Tan, a PhD Student based at the Jodrell Bank Centre for Astrophysics in Manchester’s School of Physics and Astronomy, was part of an international team including fellow astronomers at Manchester, ASTRON and the University of Amsterdam.

The team carried out the observations using the Low-Frequency Array (LOFAR), whose core is located in the Netherlands. Their findings were published in the Astrophysical Journal.

Pulsars are rapidly rotating neutron stars that produce electromagnetic radiation in beams that emanate from their magnetic poles. These “cosmic lighthouses” are born when a massive star explodes in a supernova. After such an explosion a super-dense spinning “neutron star” is left behind with a diameter of only about 20 kilometres.

The fastest-spinning pulsar known to science, at present, rotates once every 1.4 milliseconds, that’s 716 times per second or 42,960 a minute.

Until now, the slowest-spinning pulsar known had a rotation period of 8.5 seconds. This new pulsar, which is located in the constellation Cassiopeia some 5,200 light-years away from Earth, spins at the much slower rate of once every 23.5 seconds.

What makes the discovery even more unlikely is that the radio emission lasts just 200 milliseconds of the 23.5 second rotation period.

Chia Min Tan explains: “The radio emission that comes from a pulsar acts like a cosmic lighthouse and you can only see the signal if the radio beam is facing towards you. In this case the beam is so narrow that it might easily have missed the Earth.

“Slow-spinning pulsars are even harder to detect. It is incredible to think that this pulsar spins more than 15000 times more slowly than the fastest spinning pulsar known. We hope that there are more to be found with LOFAR”.

The astronomers discovered this new pulsar during the LOFAR Tied-Array All-Sky Survey. This survey is searching for pulsars in the Northern sky. Each survey snapshot of the sky lasts for one hour. This is much longer than used in previous surveys, and gave the sensitivity needed to discover this surprising pulsar.

Not only did astronomers “hear” the regular ticks of the pulsar signal, they could also “see” the pulsar in LOFAR’s imaging survey. Co-author Professor Ben Stappers, also from The University of Manchester, said: “This pulsar was bright enough and spins slowly enough that we could see it blinking in the images.”

The pulsar is approximately 14 million years old, but still has a strong magnetic field. Co-author Jason Hessels, ASTRON and University of Amsterdam, added: “This discovery was completely unexpected. We’re still a bit shocked that a pulsar can spin so slowly and still create radio pulses. Apparently radio pulsars can be slower than we expected. This challenges and informs our theories for how pulsars shine.”

The next step for the astronomers is continuing their LOFAR survey to find new pulsars. They are also planning to observe their new find with the XMM-Newton space telescope. Chia Min Tan added: “This telescope is designed to detect X-rays. If the super-slow pulsar is detected as a source of X-rays, then this will give important insights into its history and origin.”

A growing income divide between young and old finds report