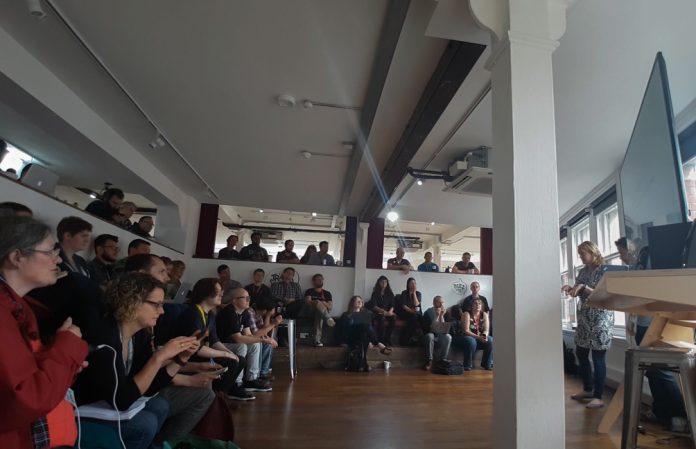 Over 50 tech and digital professionals from across the North West came together at the weekend to help end the homeless and rough sleeping situation in Greater Manchester.

Following presentations from Viv Slack, the founder of Street Support, Beth Knowles, co-chair of the Greater Manchester Homelessness Action Network, PC Dave Fisher from Greater Manchester Police and Mooch, who has previously spent time living on the streets, the teams were given a number of hack challenges and data sources to work on.

Six teams worked to develop and present their concept or prototype. At the end a panel of judges picked the best idea, based on feasibility and innovation.

Team “Stop the Spiral” were awarded first place for their bold concept that challenged the assumption that people wouldn’t give short-term support in their own homes. Inspired by the foster care and Airbnb models, they designed a vetting and matching service to match people in need, ideally before they are at risk of becoming homeless, with those willing to offer a spare room.

The team also challenged the Government to consider this as an alternative to the bedroom tax model, where people are incentivised through tax breaks for giving up a spare room.

Other concepts included a web-based incident reporting tool that allows people to flag concerns and a brief description when they see someone in trouble on the streets of Manchester, an ethical lottery app that could be used to encourage giving for the homeless, and a mobile charging station that worked as a WiFi hotspot to allow people on the streets or in crisis to charge their phones, access free WiFi and see targeted support information when signing up.

Hilary Stephenson, managing director of digital user experience (UX) agency Sigma, said: “We hope the winning concept will be picked up by CityVerve, a partnership of 21 organisations including Manchester City Council, Manchester Science Partnerships and the University of Manchester, who are all working together to build a smarter city.”

The latest figures show that rough sleeping in Greater Manchester has increased by more than 40% in the last year.

Katie Gallagher, managing director of Manchester Digital, said: “Rough sleeping and homelessness in Greater Manchester is a huge problem and our members were keen to take action, so we offered our support and expertise to help create this event. The range of ideas were impressive and we hope they will contribute and build upon the important work that is already happening in Manchester.”

Viv Slack, co-founder of Street Support Network, said: “The diversity in the room created a great energy – people with personal lived experience of homelessness, representatives from charities, housing associations and the police, policy makers, academics and a mix of creative and digital folk. The time we spent together delving deep into the issues and really understanding where the gaps and challenges are was invaluable.”

Carrington based manufacturer of hand sanitiser produced over 510,000 units in two days, set...