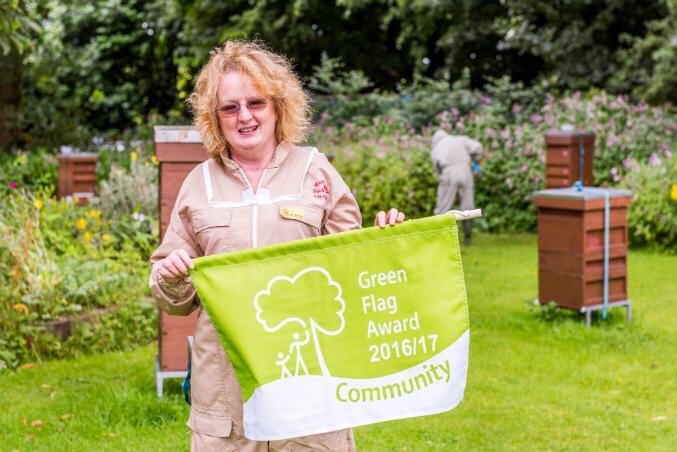 The Queen Bee of Manchester’s parks has been crowned with three Green Flag awards for 2016 – including a special community award handed to a century-old beekeeping club which is based at the park.
The Manchester and District Beekeepers Association, whose apiary (bee garden) is at Heaton Park, made it a hat-trick by scooping a Green Flag Community award, in recognition of their passion for engaging local people with their environmentally important work.

The Green Flag award recognises the best green spaces in the country and sets the standard of excellence for recreational green areas. Alexandra Park, in Moss Side, has also been awarded Green Flag status this year.

Green Heritage Site accreditation is given to sites where the ability to conserve, enhance and help people enjoy the heritage value of the site has been well demonstrated.

And Community Award judges praised the Manchester Beekeepers for their friendliness, keenness to share their knowledge and their innovative ideas – all of which have helped the group to educate visitors about the fascinating world of bees, their vital importance to the food chain – and the threats that they face from man.

The beekeeping association has existed in Manchester since 1895 and has been at Heaton Park for more than 30 years.

They are now based at the park’s Grade II-listed Dower House building, selling their locally-foraged honey both there and at the Stables Cafe in the park.

Around 40 volunteers regularly help out at the apiary. Lena Crowe has been involved with the group since 2006 and has seen its membership surge from around 30 members at that time to more than 270 beekeepers today.

Lena said: “I was ecstatic when we received the Community Award, which recognises all the hard work we do to engage with local people.

“We’re open to visitors every Sunday. We also help to train up new beekeepers and keep in close touch with people once they’ve set up their own hives in their garden, or on their allotment or farm.

“It’s really important to look after bees, as their role as pollinators is absolutely crucial to our environment – without them, much of the food we eat would no longer grow.

“We help people to keep bees, but everyone can do their bit to help them, just by planting bee-friendly plants in their gardens. There are some really beautiful native plants which bees and other pollinating insects love and are wonderful to look at, too.”

As well as the hives in the apiary, the group keeps a demonstration hive, which provides a close-up insight into the intricate workings of a live colony.

“The hive is the centre of the bees’ universe. They are completely community-focused and everything they do is for the benefit of the colony.”

The apiary and the Dower House building are open to public every Sunday (12 – 4pm).