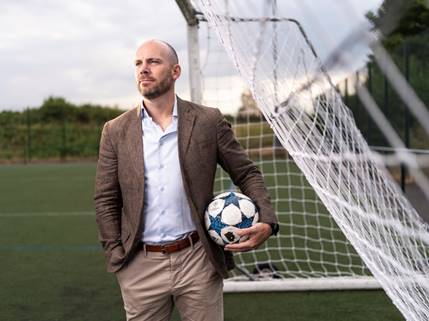 A Manchester football agent has set up an online training academy to help others seal deals with top-flight players.

Sam Stapleton has been involved in the lucrative industry for 15 years with his Star Sports and Entertainment agency. He is most well known for steering the signing of England ace John Stones from Barnsley to Everton as well as other notable deals.

But now the 38-year-old – who first started negotiating when he was still a student – is revealing all the tricks of the trade for those who fancy standing in his shoes.

Along with his business partner Zoran Krneta, he has now embarked on his new venture, Football Further – an in-depth series of eight online tested modules, which take around 16 weeks to complete.

Aspiring agents will learn the art of player contracts and negotiations, how to get and keep a client, dealing with the press, as well as all the legal requirements and rules and regulations of the industry.

Sam said: “In 2015 there was a deregulation of agents – that means that no one has to do an exam anymore – they complete a criminal check (known as the Test of Good Character and Reputation), pay a fee to the FA and they’re off. Whilst this can be exciting for ‘wannabe agents’, it can also be daunting and without the right support and training, there’s no guarantee of overnight success in the industry”

He hopes that setting up this course will make a small dent in the industry and legitimise the job of agents, letting people see why they’re doing a good job.

“I’m doing this to make people stand out from the crowd and get rid of the amateurs. Being on the course gets you a lot closer to doing your first deal. So many people are paying fees to the FA yet know little about what the industry is actually like.”

City season ticket holder, Sam, says the new style course should attract four different markets – those who have just left school or university, existing young agents, people in sales who are considering swapping careers and ex-professionals such as former players themselves.

But Sam, who faced many a deadline day dilemma including a failed medical for one player and John Stones going to Wigan from Barnsley, only to sign on the dotted line for Everton at the eleventh hour, was nearly talked out of following his beloved career.

As a youngster at school careers evenings, he was laughed at when he said he wanted to be a football agent – and ended up taking a degree course in sports management at Northumbria University.

“The type of course I needed just wasn’t available back then. I wish there had of been as it would have saved me a lot of time, effort and money. I ended up leaving the degree and moving to London to do work experience for an agency, whilst working in a bar to pay my rent.

“Being a Football Agent is amazing, interesting and rewarding but as with every business, there are good and bad agents. We hope to be providing detailed education to the next breed of accomplished agents.”

Having graced the ladder to the top, he’s now working hard before the summer transfer window closes on August 9.

And he believes the Blues are in the strongest position as they look to retain their Premier League title next season.

He added: “There was a time when City had to spend big to build their new squad under their new owners. Now they don’t necessarily need to spend a lot to add to the squad. If anything it’s United that need to rebuild. The tides are changing and for the moment, Manchester is most definitely blue’.

The Complete Football Intermediaries Course is now open for registration, with the first intake set to kick-off on September 1.

Which currency pair is most profitable in forex 2020?