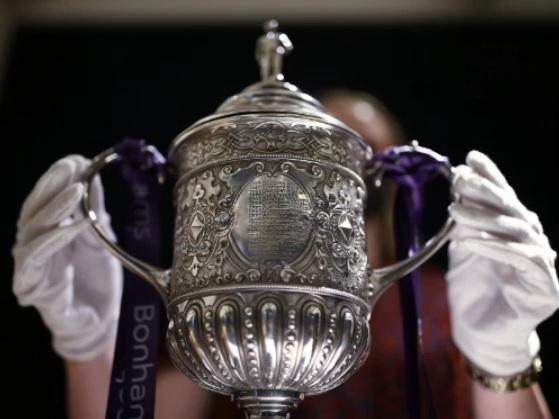 Manchester City are now the proud custodian of the 1896–1910 FA Cup following the recent purchase of the trophy at auction by Club owner,Sheikh Mansour bin Zayed.

The trophy, considered by The Arts Council to be an item of International Historic Significance, looked like it would be privately purchased and taken overseas.

However, the trophy will now remain in England for the benefit of English football.

A forerunner of the FA Cup in use today, the trophy is one of the most significant artefacts in world football and the oldest surviving piece of FA Cup silverware in England.

It was also the first trophy won by Manchester City 116 years ago in the 1904 FA Cup final, when the Club beat Bolton Wanderers 1-0, becoming the first professional football club from the city of Manchester to win a major honour.

The trophy has been offered on loan to the National Football Museum in Manchester, where it has been housed since 2005.

The intention is to keep the trophy accessible for football fans in Manchester and across the country to visit and enjoy. The National Football Museum has accepted the offer and the creation of a new presentation display is underway, to be completed ahead of the museum’s reopening once current COVID-19 restrictions are lifted.

Widely heralded as the beginning of a new era in Manchester’s sporting culture, City’s 1904 FA Cup win is credited with helping establish football into the city’s wider cultural life, moving sporting loyalties away from Rugby for which Manchester was then better known.

This cultural transformation was exemplified by the Club’s then ground-breaking decision to take part in the first trophy parade in Manchester’s history.

To commemorate City’s 1904 FA Cup victory, a documentary has been produced by CityTV which charts the story of the Cup Final and the Club’s journey in the competition up to the present day.

A trailer for the documentary has been released today ahead of the full launch on mancity.com on Saturday, January 9th.

Commenting on the trophy and its purchase by Sheikh Mansour, Club Chairman, Khaldoon Al Mubarak said:

“This Cup is a visible reminder of the rich and long history of English football to which Manchester City is inextricably entwined.

“Winning this actual trophy in 1904 was a turning point for the Club and for the city of Manchester in that it firmly cemented football in the heart of its community.

“Sheikh Mansour’s view is that a trophy of such cultural significance must be shared with the people of Manchester, the English football family, and all of those who love the English game. The National Football Museum is in a unique position to do that.”

“When it left us in September 2019 to be auctioned by its then owner, we feared we may never see it again and that Britain would be losing the FA Cup for good.

“The fact that it has been bought by His Highness Sheikh Mansour and offered back to us is simply wonderful news both for the National Football Museum but also for the preservation of our sporting heritage in this country.

“We look forward to welcoming visitors from Manchester, the UK and beyond to see this special trophy as soon as circumstances allow.”

New faster rail to Liverpool promised from next month