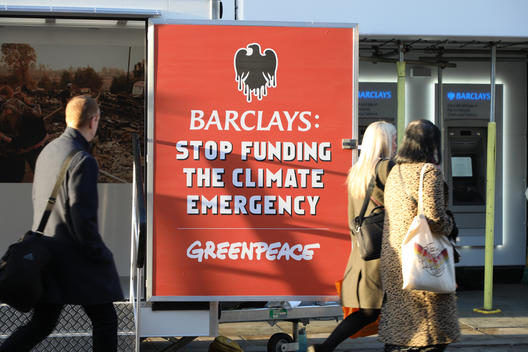 Over 95 local Barclays high street branches have been shut down by Greenpeace activists this morning as part of a national protest against the bank’s continued multi-billion-dollar support for fossil fuels.

Greenpeace is demanding that Barclays, the biggest funder of fossil fuels among European banks, stop propping up oil, gas and coal companies and channel funding into renewable energy.

In the early hours of the morning, Barclays branches across the city, including in Market Street, Oxford Road and St Anne’s Square, were rendered out of action by Greenpeace activists who disabled the doors, preventing staff from entering. Similar actions took place at over 90 sites in towns and cities across the UK. At targeted branches, images of Barclays customers bearing slogans such as Stop Funding Fossil Fuels and Stop Funding the Climate Emergency were plastered on branch windows.

Pop up exhibitions, manoeuvred into place in the dead of night and staffed by Greenpeace activists, have blocked access to major branches of the bank in Manchester, as well as Belfast, Cardiff, Glasgow, London. The exhibitions displayed photographs of some of the worst climate emergency disasters in the four years since the Paris Climate Agreement was signed.

Banks funding remains vital to fossil fuel companies. Barclays is the biggest funder of fossil fuels amongst banks in Europe, backing polluters to the tune of $85 billion between 2016 and 2018. This included huge sums globally for some of the dirtiest fuels such as coal and tar sands and fracking companies. The Bank has been under increasing pressure from investors to stop offering loans to fossil fuel companies, with Barclays expected to make a statement on the issue in the coming month. The region has been saturated by downpours in recent months, with several flooding incidents as a result of Storm Ciara and Storm Dennis, and we must do more to protect our environment.

“Barclays must stop funding the climate emergency, that’s why we’ve taken action in Manchester and across the country today. From floods/other climate impacts in Manchester and Greater Manchester to bushfires across the globe and record heat in Antarctica, the effects of this crisis are staring us in the face. Yet Barclays keeps pumping billions into fossil fuel companies at exactly the time we need to stop backing these polluting businesses.

Banks are just as responsible for the climate emergency as the fossil fuel companies they fund, yet they’ve escaped scrutiny for years. We’ve shut down branches across the country to shine a spotlight on Barclays’ role in bankrolling this emergency. It’s time Barclays pulled the plug and backed away from funding fossil fuels for good.”

Funding win for £6m scheme to cut carbon emissions from buildings including the National...