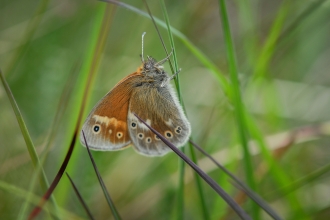 A butterfly that has been extinct in Manchester since 1850 will return to the area once more.

The Manchester argus (or large heath) butterfly disappeared from mosslands just outside the city more than 150 years ago. First discovered on Chat Moss, it deserves its place back in Manchester. The GM Wetlands Species Reintroduction Project will bring these wonderful butterflies back to these mosslands over the next few years.

Mosslands (lowland raised mire) have suffered a 98 per cent decline in the North West. The remaining fragmented landscape is missing key species because of development, drainage, peat extraction and fragmentation. These species are unlikely to recolonise naturally.

The species reintroduction project, centring on the Manchester Mosslands SAC, is on a landscape scale.

Along with a programme of re-wetting the mosslands, the plant introductions provide a strong base from which species like the large heath butterfly, locally called the Manchester argus, can be reintroduced.

While varieties of plants like the carnivorous sundew, sphagnum moss and cotton grass have started their return, they still need some help from our teams, while other plants need to be reintroduced after years away from this their rightful home.

Over the length of this long-term project, which started in 2018, other species like the white-faced darter dragonfly, the bog bush cricket and reptiles like the grass snake will add to the list of returnees.