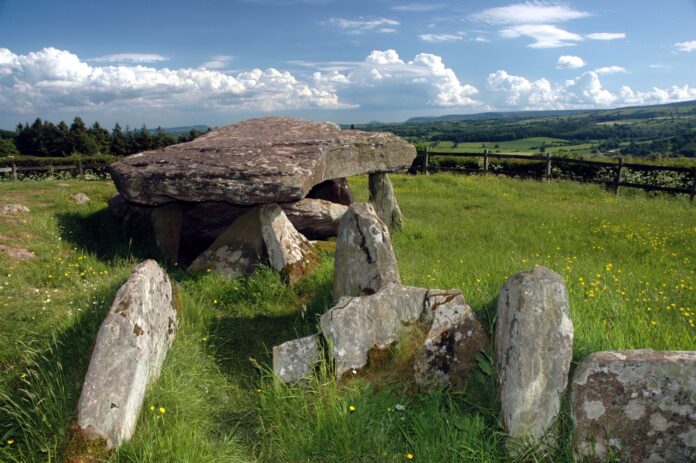 Archaeologists from the Universities of Manchester and Cardiff have discovered the origins of Arthur’s Stone, one of the UK’s most famous Stone Age monuments.

Manchester’s Professor Julian Thomas, who led the excavation, says the imposing Herefordshire tomb is linked to nearby ‘halls of the dead’, which were discovered in 2013 by a team led by Professor Thomas.

It is the first time the construction – which inspired the ‘stone table’ in C.S. Lewis’ The Lion, the Witch and the Wardrobe – has been properly excavated.

Dating to the Neolithic period in 3700BC, Arthur’s Stone is located on a lonely hilltop outside of the village of Dorstone, facing the Black Mountains in south Wales.

Archaeologists always assumed that its massive capstone raised on a series of supporting stones and lesser chamber with a right-angled passage had stood within a wedge-shaped stone cairn, similar to those found in the Cotswolds and South Wales. However, Professor Thomas and Cardiff’s Prof Keith Ray showed the monument originally extended into a field immediately to the south of the tomb.

Arthur’s Stone is a scheduled monument cared for by English Heritage. The excavations took place in an area to the south of the burial chamber, outside of the area of guardianship.

They found that the tomb had first been a long mound composed of stacked turf, retained by a palisade of upright posts set in a narrow palisade surrounding the mound. However, when the posts rotted away and the mound had collapsed, an avenue of larger posts were added, leading toward the mound from the Golden Valley below.

The initial mound, identifiable in the palisade slot and the parch-marks visible from the air surrounding the stone chambers, points toward the nearby hilltop of Dorstone Hill.

However the later avenue of posts, together with the two stone chambers and an upright stone located immediately in front of them, align on the far horizon in the gap between Skirrid and Garway Hill to the south-east.

“The different orientations of the two phase of construction are significant because our excavations on Dorstone Hill in 2011-19 revealed three long mounds similar in construction to that now known to represent the first stage of Arthur’s Stone,” added Professor Thomas.

“Each of these three turf mounds had been built on the footprint of a large timber building that had been deliberately burnt down. So Arthur’s Stone has now been identified as being closely connected with these nearby ‘halls of the dead’, which hit the headlines in 2013.

“Indeed, the block of upland between the Golden Valley and the Wye Valley is now becoming revealed as hosting an integrated Neolithic ceremonial landscape.”