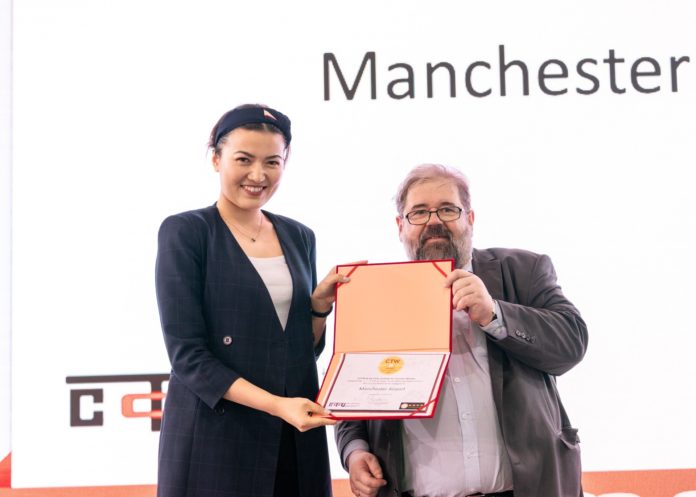 Manchester Airport has scooped a prestigious international award in recognition for its efforts to welcome Chinese passengers through the Northern gateway.

The UK’s third largest airport won a gold award for its overall performance at the Chinese Tourist Welcome Awards, organised by the China Outbound Tourism Research Institute.  It comes for the airport’s Chinese New Year campaign that took place in February to mark the Year of the Pig.

With more than 260,000 passengers travelling to Beijing and Hong Kong in the last year, Manchester Airport continues to play its role as the UK’s global gateway in the North.  Hong Kong has been operated by Cathay Pacific for four and a half years and Beijing with Hainan Airlines for nearly three years.

Since the launch of direct flights to China, there has been a 38% increase in the number of Chinese visitors to the North since 2016 – a growth rate higher than both London and the UK average.  Whilst the average spend per visit in the North West increased by 94% to £2,167 and is now 5% higher than the national average.

The Chinese New Year campaign celebrated these links and thanked passengers for choosing to fly to China from Manchester.  An integrated campaign, it included a mixture of experiential, digital and retail activity.

It saw a stunning Chinese Wishing Tree setup in Terminal Two, giving passengers the opportunity to hang their New Year wishes and desires from the branches of the 10ft blossom tree. In China, blossom trees symbolise new growth, transformation and prosperity.  There was also a touch of theatre with traditional lion dance performers as well as dedicated retail offers.

Julian Carr, Aviation Director at Manchester Airport, said: “We’re honoured to have won this award for our work welcoming passengers to the North of England.  Our services to China continue to go from strength to strength, and the region is seeing the economic and social benefits of these links, so it’s hugely important that we make great efforts to make our Chinese passengers feel at ease, as they’re travelling through the airport.

“For the last few years our Chinese New Year campaigns have proved hugely popular and the celebrations to mark the start of the Year of the Pig were no different.  We look forward to welcoming even more Chinese visitors through our terminals in the future.”

A representative from the airport collected the award at a ceremony in Shanghai, and also presented about the importance of Chinese links to the region.

Salford Wig maker has a head for business

Nearly two thirds of firms have three months’ cash in reserve or less...