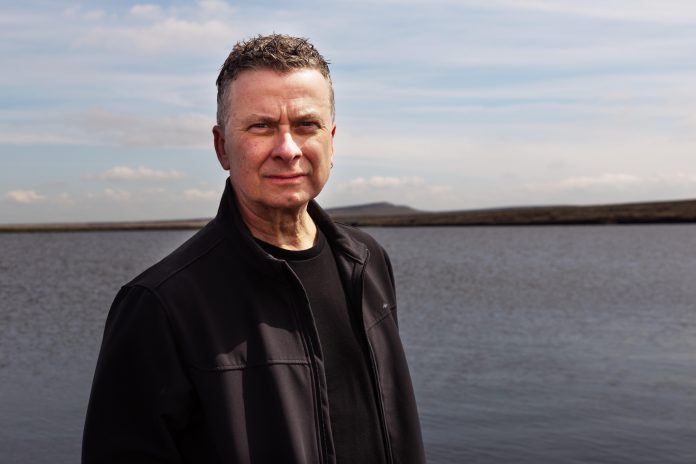 After forging a successful career as a journalist, producer and director working in both London and Manchester, David Nolan has released his first crime novel Black Moss.

Taking inspiration from Scandi noir, he has put a Manchester spin on the genre.

The novel is set in 1990 when rioters took over Strangeways prison in Manchester. Away from the chaos, someone killed a little boy at Black Moss, and the story follows Danny Johnston, an inexperienced radio reporter, as returns to his home city to try and uncover the truth behind the murder more than a quarter of a century after it took place.

Black Moss is available to purchase on Amazon.

I was ‘asked to leave’ school aged 16. I went for a careers advice chat with the school woodwork teacher the day before I left and he asked me what I wanted to do. I said ‘journalist’ because I hadn’t actually given it any thought. He gave me two cards with jobs on them to apply for – one for groom on a stud farm and one for trainee journalist. I got the journalist one. Ridiculous really. I went on to work in newspapers, magazines, radio and TV. I was at Granada TV for 13 years and made hundreds of programmes for ITV. I’m the luckiest person you’ll ever meet. But I often wonder what I would have been like as a groom.

I’d written loads of music books – Tony Wilson’s biography, a book on Bernard Sumner from new Order, I Swear I Was There which is about the famous Sex Pistols gig in Manchester in 1976… 11 books I was really proud of. Then I got involved in an historic abuse case involving a teacher from my old school, St Ambrose in Hake Barns. I wrote a book about the case and the subsequent trial called Tell The Truth and Shame the Devil and I was completely overwhelmed by the reaction to it. Someone said to me, oh David, you’ve written your first proper book! They weren’t being rude but I knew what they meant. So that lead to me thinking, there’s lots more I want to say about child protection and missing children in this country, maybe I could hide it in a novel.

The tricky stuff was the whole ‘making things up’ aspect of fiction. I found that really hard, so on the whole I didn’t make stuff up. About 75 per cent of the book is based on real situations that I’ve been involved in over the years. If you read the book and think ‘that’s a bit far-fetched’ you can bet that bit is real.

I spent 25 days outside Strangeways jail during the riot in 1990. I don’t remember covering any other stories. I remember thinking at the time – this would be the perfect time to commit a murder, no one cares about anything other than Strangeways. Years later I was walking in the hills near Oldham and spotted this bleak reservoir. It had a beach. Ian Brown once said that Manchester has everything apart from a beach, yet here was a beach. I thought… ideal place to dump a body. Then I looked at the map and realised it was called Black Moss. Perfect.

I’m writing a follow up that involves some of the characters. I want to write a set of thrillers that use those bleak landscapes around Manchester. They’re as scary as anything the Scandinavians have. Give me Manc Noir over Scandi Noir any day.