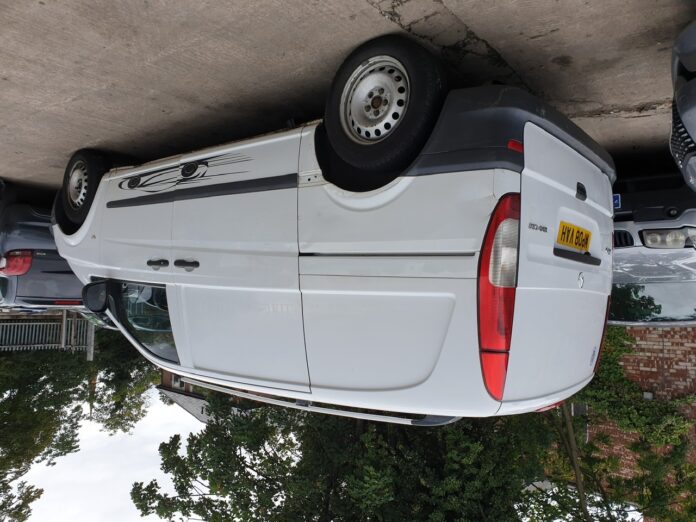 Two men have been arrested on suspicion of conspiracy to kidnap after a man was believed to have been abducted in Manchester on Saturday.

The victim was bundled in to the back of a white Mercedes-Benz Vito van on Swanage Avenue around 12.30 on Saturday lunchtime says police.

The van has distinctive stickers on the side. The number plate is WP08 VAH.

The van was then seen leaving Swanage Avenue heading towards Wendover Road before been later seen on Shentonfield Road just before 1.00pm where it was abandoned. The van has since been recovered by officers for forensic analysis.

The victim has not been found and officers are becoming increasingly concerned for his welfare.

This is being treated as an isolated incident.

Two men – aged 44 and 46 – have been arrested on suspicion of conspiracy to kidnap.

Enquires remain ongoing and detectives are appealing for witnesses or anyone with information to contact police.

Detective Sergeant Mark Hodgson, of GMP’s City of Manchester district, said: “If anyone recognises the van in this photo or has any information at all that could help us to locate the victim, please get in touch with police as a matter of urgency.”

“Although we have two men in custody, our investigation is still very much ongoing and the victim’s safety is our number one priority. Any information at all, no matter how insignificant you may feel it is, could prove essential in assisting our investigation.

“I would like to reassure the public that this is believed to be an isolated incident, with no wider risk to the community. Residents will see increased police patrols in the area as we carry out our enquiries, so please do speak to our officers if you have any concerns.”