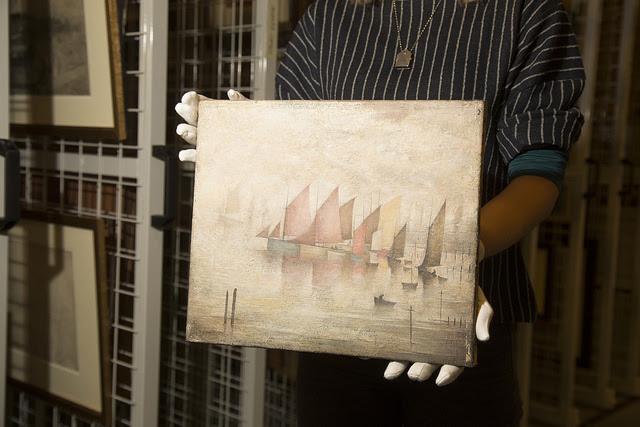 A member of LS Lowry’s extended family has left three works of art by his famous ‘uncle Laurie’ to The Lowry Collection in his will.

Geoffrey Shephard, who passed away in August 2016, was the grandchild of Annie Hall Shephard – a cousin of Lowry’s mother, Elizabeth.

The works bequeathed are: an oil painting entitled Sailing Boats 1912; an ink drawing on paper entitled Groups of Figures c1950; and a signed print ofDeal, showing the harbour in Kent.

Lowry gave Sailing Boats 1912 to Geoffrey’s parents, William and Nellie, as a wedding present on their marriage in 1920. As second cousins, they were close friends throughout their lives, with Lowry acting as godfather to their eldest son, Ronald, Geoffrey’s older brother.

Julia Fawcett OBE, chief executive of The Lowry, said: “Given their family provenance, these works are an incredibly special addition to our collection.

“Sailing Boats was painted when Lowry was just 25 years old – many years before the critical and widespread recognition he went on to achieve. It depicts a subject matter we know Lowry’s mother approved of – and she wasn’t always that forthcoming with her approval – so I’m sure it was highly valued as a personal wedding gift.”