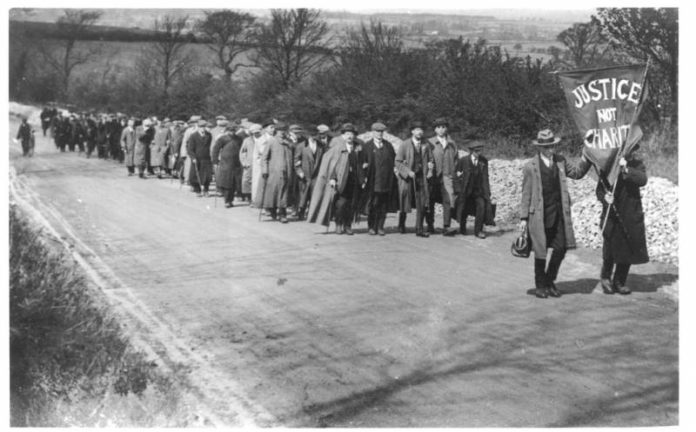 Blind and partially sighted campaigners from Manchester commemorated the centenary of the ‘Blind March’ this weekend by using their daily exercise to take their own symbolic steps for equality.

The Blind March, which started on 5 April 1920 from Manchester, Newport and Leeds, saw hundreds of blind and partially sighted people travel to London on foot in order to meet the Prime Minister, David Lloyd George, and demand fairer rights for people with sight loss.

The event, which was organised by the National League of the Blind, was the first disability movement of its kind and successfully resulted in the Blind Person’s Act 1920 – an early precursor to today’s Equality Act (2010).

Now, 100 years later, the Royal National Institute of Blind People is asking people to use their one exercise a day to remember this event and take their own steps for equality.

Francesca, from Greater Manchester, was one of the people to mark the historic occasion by re-enacting the first steps of the march via video. She said: “I’m marching today to celebrate the progress made in equality and education for blind and partially sighted people over the last hundred years.

“Throughout my experience of education, I’ve benefitted from the specialist support and technology that is now available to blind and partially sighted children and young people, that wasn’t available 40 years ago, let alone 100.

“There is still a long way to go, however, as many young people with sight loss still experience a postcode lottery when trying to access education. This significantly impacts their ability to contribute fully to society.”

Terri, also from Greater Manchester, was another participant in the virtual march, saying: “I’m marching for equality of access to information. Being able to read information that allows you to make important decisions is a basic human right.

“Things have changed in the hundred years since blind and partially sighted campaigners marched to London, but there is still much more to be done.”

Pete Forrester, from Ashton-under-Lynne, described his reason for taking part in the march by saying: “I’m blind from birth, due to a congenital birth defect.

“I’ve seen changes in the work environment, allowing many blind and partially sighted people to take up active and meaningful employment, something which I believe will improve in the future due to emerging technologies and the continued growth in the number of people working from home.

“I hope that we’ll see a similar trend in the general populations’ acceptance of blind and partially sighted people and indeed all disabled people in society.”

Keith Valentine, Director of Development at RNIB, has also taken his own steps in commemoration for the event. He said: “Society has moved on leaps and bounds over the last hundred years. But, for all our progress, many of the issues that the National League of the Blind marched to London to change remain the same today.

“Just like in 1920, blind and partially sighted people continue to face barriers finding and keeping employment, accessing education and getting appropriate Government support. There has been some progress, but it’s not good enough. That’s why we want people to use their one exercise a day to get moving and take their own steps for equality.”

To find out more about the history of the Blind March and how RNIB are marking the event, visit: www.rnib.org.uk/campaigning/marching-history

Brave Battle of Britain heroes to be honoured in Trafford

A use for the much maligned Pacer after all