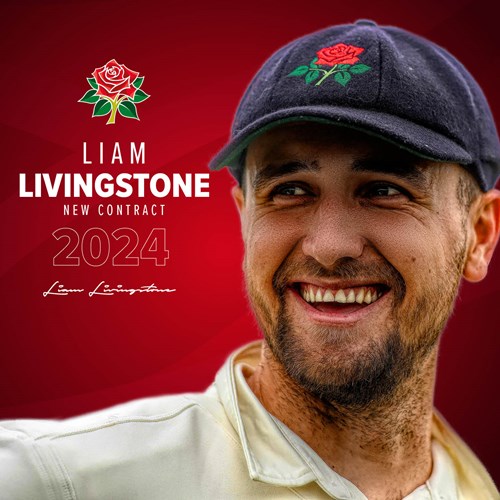 Liam Livingstone has signed a new long-term contract at Emirates Old Trafford, until at least the end of the 2024 season.

The Lancashire and England batsman has been a mainstay in the side across all three formats since making his debut during the 2015 Blast winning campaign.

Livingstone, 28, is a graduate of the Lancashire Cricket Academy and has now made 163 appearances for the Club.

The hard-hitting batsman from Barrow averages a touch below 40 in First-Class cricket and his devastating strike rate of over 140 in T20 cricket has earned him a reputation as one of the world’s most explosive short form cricketers.

His form has led to call-ups into England’s white ball squads – most recently featuring in the ICC T20 World Cup this winter – and appearances in T20 leagues around the world including the Indian Premier League, Big Bash and Pakistan Super League.

Livingstone has struck a century in each form of the game for Lancashire – including five in First-Class cricket – and in 2018 he became one of just six Red Rose batsmen to notch a century in T20 cricket with a 51-ball blitz at Derbyshire.

He has also added leg-spin and off-spin bowling to his game in recent seasons – picking up 83 wickets across all three formats for Lancashire.

After signing his new deal, Livingstone said: “I love playing for this Club and it was an easy decision for me to extend my contract.

“I have always said that it is a privilege to play for the Red Rose and I am delighted to have the opportunity to continue doing that until at least 2024 and hopefully much longer after that.

“The coaching team and supporters have shown great faith in me throughout my career and I am determined to pay that back by helping to deliver trophies to Emirates Old Trafford over the next few years.”