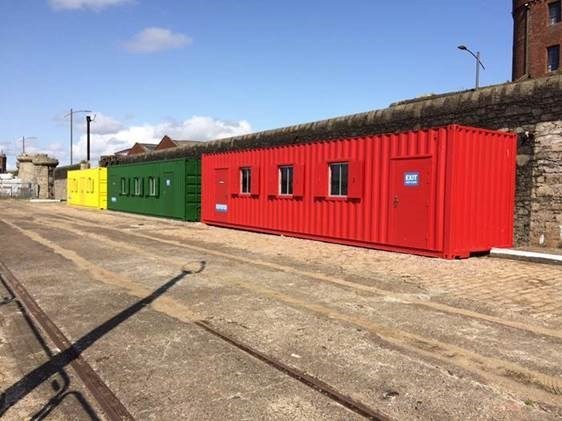 The Docklands Trail – the first phase of which is being launched at Collingwood Dock this week – is a tour of the North Liverpool and Bootle Docks’ history, reflecting their importance to the city and region and to world events.

The trail is a set of specially customised shipping containers housing artefacts and memorabilia to create a series of walk-through museums telling the stories of the Waterloo, Stanley, Huskisson, Canada, Gladstone and Seaforth docks.

The Docklands Trail is a registered charity founded by a group of retired ex-pupils from Bootle Grammar School. The group was formed from the desire to give something back to the local community and to say thank you for their upbringing and education in Bootle.

Collingwood Dock is the first of at least three sites on the trail. It has four customised containers which will give an overview of the trail, tell the story of Waterloo Dock and chronicle the life of legendary Liverpool dock builder Jesse Hartley. One of the containers will be used by the Canal and River Authority to tell the history of the Leeds/Liverpool Canal.

Further instalments of the trail are planned for Huskisson and Seaforth Docks.

Les Ellis, Chair of Trustees of The Dockland Trail, said: “The trail will create a tourist attraction that will bring visitors to Liverpool out to the dock area to learn about our proud involvement in global trade and the docks’ role during wartime. Its success as a tourist attraction will sustain the trail for the benefit of our local communities, who will be able to use the facility for educational, local interest and job awareness purposes.”

Mayor of Liverpool Joe Anderson said: “The importance of the docks to the story of Liverpool cannot be understated.

These once-thriving areas were the city’s gateway to the world and provided jobs and livelihoods for thousands of residents. They are rich sources of the city’s heritage and unique culture. The Docklands Trail is a great example of the local community taking ownership of its history and turning it into something really special. “Thanks to the group’s hard work and passion, the docklands’ story will be kept alive for the benefit of generations to come.”

Six Scottish Ski-cations for This Winter