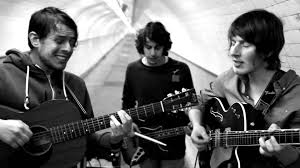 With the last coughs of autumn jerking from the trees in leafy spasms, Little Comets are delighted to let you bypass winter by announcing a Spring 2018 UK Tour, alongside a brand new EP and will be playing in Manchester.

Coming just over a year after the self-release of fourth album Worhead, sell-out headline shows and an arena tour supporting Catfish and the Bottlemen, Little Comets remain determined to encapsulate the depth of societal woe using a mix of clattering syllables, innocent melody and sweetly drummed thrust.

Since meeting under a metaphorical waterfall in Byker during the frosty Northern winter of 2009; Michael, Matthew and Robert have retained friendship and a shared sense of purpose ever since. Now backed at home by six littler comets, Little Comets reject the principles of legacy, hegemony and generative music.

As independent as the sun, the punk is in the detail.

The band play the Manchester Academy on the 13th April 2018

Tickets go on sale 10am Friday 17th November and will be available at gigst.rs/LC

New Order + Liam Gillick: So it goes.. to be streamed exclusively for MIF...