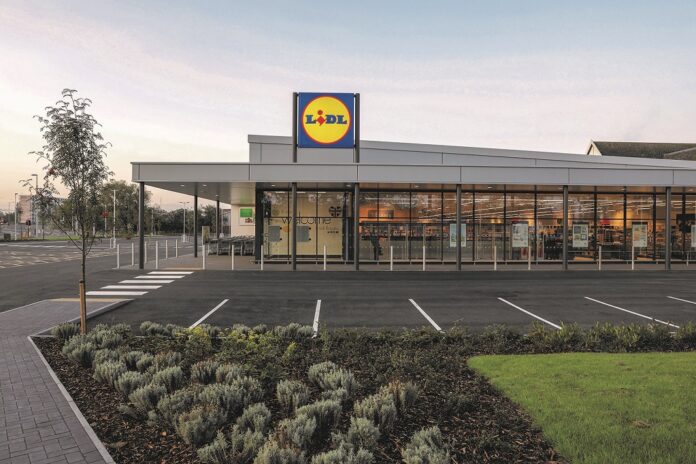 Lidl GB has announced new investment for the Salford area, confirming its submission of the plans for a new store on Mocha Parade and the launch of a public consultation for Castle Irwell.

Following a successful consultation period with the local community, the application for a new supermarket in Mocha Parade has been submitted. The plans detail a store with 1,256m² sales area, and will create up to 40 new jobs for the local economy. The supermarket will feature facilities including an instore bakery, customer toilets and 123 parking spaces. The plans also look to introduce a wildflower meadow-style flood basin, and also form part of wider development which feature the construction of a brand-new primary care centre for the area.

In addition to the proposed store on Mocha Parade, Lidl has also opened an online public consultation for a new store in Castle Irwell, during which the public are invited to comment on the proposals.

The plans for the Castle Irwell store include a 1,414m² sales area which will look to create around 40 new full time and part time jobs.

Lidl GB’s Regional Head of Property, Nick Harvey, commented: “We are extremely excited about the prospect of opening two new stores in Salford, and delivering our great range of high quality and affordable produce to even more of the local community. If approved, together these stores would mark a multi-million pound investment and around 80 new jobs which would be fantastic for the local area. We have received an incredible amount of support from the local community so far and we would like to take the opportunity to thank everyone for their support and feedback.”

The new supermarkets form part of the company’s £1.3bn investment plans across Great Britain in 2021 and 2022. Its ongoing success shows no signs of slowing, with the latest Kantar Worldpanel results highlighting Lidl’s increase in sales year on year and market share of 5.9%.

To access the public consultation online residents should visithttps://tinyurl.com/lidlcastleirwell before 19th February 2021 to take part. Residents with questions about the proposals can also call Lidl’s consultation team directly via the Freephone number 0161 8176225.