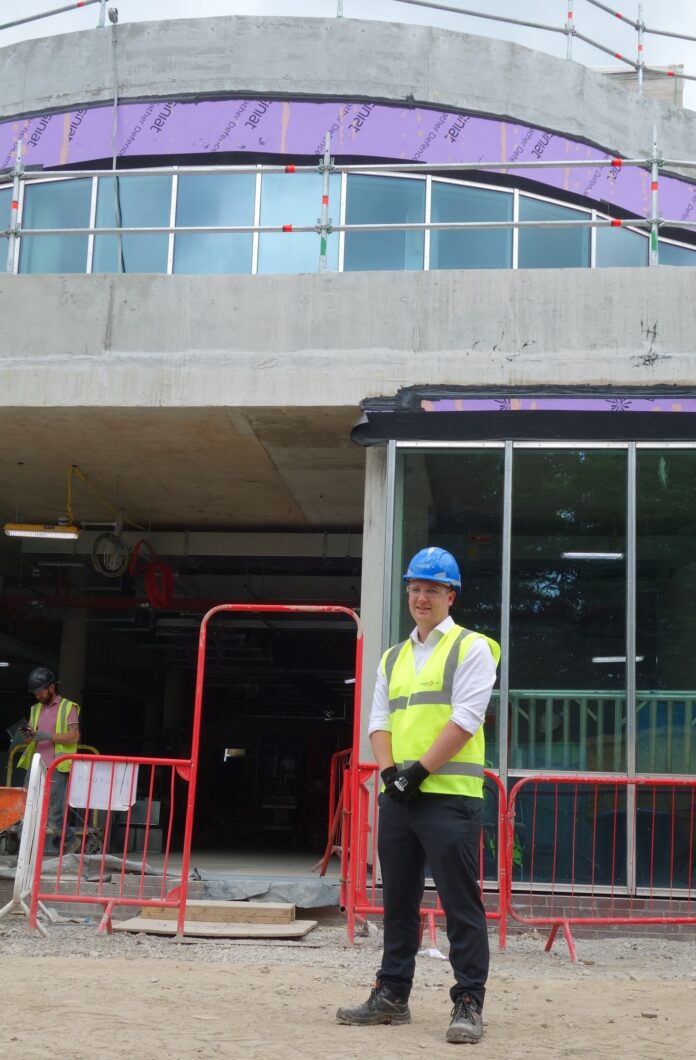 A radiographer living in Altrincham has been appointed to run the radiotherapy service at The Christie at Macclesfield, which is currently being built.

Born in the North East and brought up in Whitby, James was inspired to become a radiographer by his mum, Elaine, who was a diagnostic radiographer. He studied for a BSc in radiotherapy at Sheffield Hallam University, graduating in 2008. His first job was at James Cook University Hospital in Middlesbrough but two years later he relocated to The Christie at Oldham, just as that centre was opening and the first time The Christie had provided radiotherapy away from its Withington site.

In 2013, James decided to specialise in pre-treatment radiography – overseeing all the preparations to make sure that patients have an expertly planned course of radiotherapy that will be as effective and accurate as possible.

James began studying for an MSc in radiotherapy and oncology in 2013. His promotion to the rank of superintendent radiographer came in 2014 and in 2015 James started working at The Christie at Salford. He completed his MSc in 2017 and was also promoted to his current role at Withington as principal radiographer for pre-treatment.

James’s role at The Christie at Macclesfield will be to manage the day to day service in radiotherapy, including the radiotherapy treatments and CT scans of patients. He will be the most senior member of staff working at the new centre and will coordinate patient care with lead staff from other clinical disciplines including the chemotherapy unit, outpatients and haematology. He will also work closely with a centre manager to oversee the smooth running of all patient services at the new site.

Commenting on his appointment, James said: “I am very excited to be taking up this new role, particularly as it will be the first radiotherapy centre in Cheshire and the first time The Christie has been able to provide a holistic local radiotherapy centre that also provides chemotherapy, outpatient appointments and other important types of patient care and treatment at the same place other than our Withington site.

“Having visited the new site during its construction recently, I can see that it is very well designed and will provide a very high quality purpose built facility for patients.

“Being a therapeutic radiographer allows me to combine state of the art technology with regular patient contact. Going through radiotherapy is sometimes the hardest thing a patient may ever face so being able to support people during this is very rewarding.”

“The Christie has the largest radiotherapy treatment service in Europe and that’s meant I’ve had access to some incredible career opportunities so far. Taking on the role of lead radiographer for The Christie at Macclesfield is undoubtedly the highlight of my career so far and I’m very grateful to The Christie for all the opportunities they have given me at Oldham, at Salford, at Withington and now at Macclesfield.

Adrian Flynn, Head of Radiotherapy at The Christie said: “James is a very strong appointment for The Christie at Macclesfield and I know he will work tirelessly to get the new radiotherapy service up and running on time, delivering the best quality treatment to the highest Christie standards. His experience at our other local radiotherapy centres in Oldham and Salford will be invaluable.”

The Christie at Macclesfield will transform cancer care, providing care closer to home for more than 1,500 patients a year. The new centre will provide a range of holistic services including radiotherapy, chemotherapy and a wider range of clinical trials than at present. It will provide 46,000 patient appointments and visits each year. The first patients will be treated in December 2021.

The Christie charity needs to raise £23m for the new centre. To support The Christie at Macclesfield go to www.christies.org/macclesfield or call  on 0161 446 3988.

UK improves cancer survival, but is still behind other high-income countries