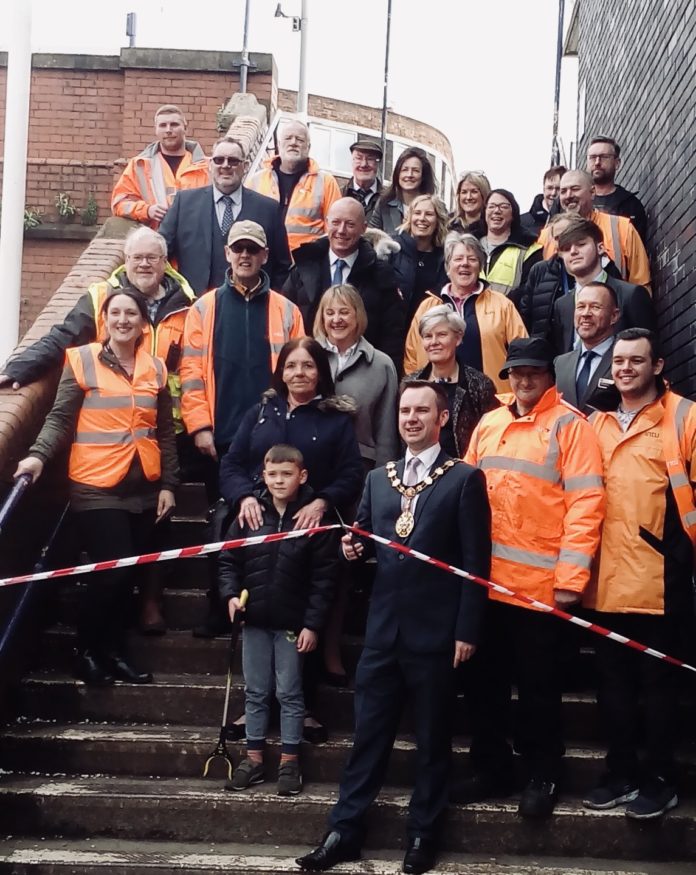 Urmston Railway Station has been officially adopted by Friends of Urmston Station (FOURS), with a group of approximately 20 people now responsible for the appearance and upkeep of the train station, making it better for passengers and the community.

To coincide with the Great British Spring Clean a group of volunteers met at The Steamhouse offering their time to clean up the train station and nearby areas ahead of the adoption ceremony.

More than 30 volunteers spent the morning sweeping, tidying and tending to the landscaping and clearing rubbish, ensuring the train station and surrounding areas were presentable for the event.  As well as local business owners, residents and Northern Rail Contractors ISS, intu Trafford Centre also sent a team of volunteers to help.

Organised by David Mackereth, Project Manager for FOURS, the official adoption ceremony was marked with a ribbon cutting on the steps of the train station with the Mayor of Trafford, Cllr Tom Ross and Kate Green, MP for Stretford and Urmston.

Commenting on the event, Cllr Tom Ross says: “It was a privilege to be involved in the launch of the Friends of Urmston Station (FOURS).  There is a real sense of community in Urmston and this latest group highlights the passion and pride business owners and local residents have in their town centre.  I wish FOURS much success; Urmston Railway Station will be a much brighter and more welcoming place.”

Alison Niven, Regional Centre Director, intu Trafford Centre, adds: “With Urmston town centre located so close to the Centre, it was important to us that we helped with the clean-up.  Our team of volunteers had a great day and we look forward to continuing to support FOURS with their various projects.”

Kate Green, MP for Stretford and Urmston, concludes: “It was great to be at the launch of FOURS and to see so many local groups come together to volunteer their time to clean up our station.”