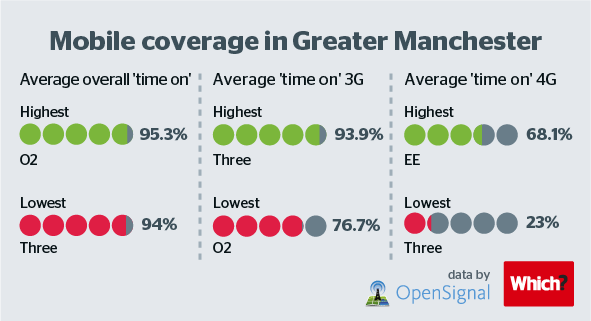 New research by Which? and OpenSignal has found that the average mobile phone user in the North West of England has a phone signal ninety four per cent of of the time.

The region is in fourth place, out of 12, across the country with only phone users in London, Scotland and the South East (though only fractionally) having a better experience.

The area does even better in the rankings of 3G and 4G coverage, which is crucial for web access on the go. Customers were able to get a 3G or 4G signal 79.2% of the time with only phone users in London (88.7%) having better access to these faster networks.

As for the performance of the four phone networks in the North West, O2 customers had the most time with access to a phone signal and were able to make calls and send texts 94.8% of the time.

However the survey found that there’s not much difference between the four, Three offered the least access but customers still had a signal 93.6% of the time.

EE also offers the fastest average download speeds in the North West. Its 4G customers get an average speed of 10Mbps,that’s faster than the average ADSL home broadband speed (7.4Mbps) though it is a shade slower than average 4G speeds across the country (10.2Mbps).

Across Greater Manchester, there is between the network with the highest average time with access to any signal (O2 – 95.3%) and the lowest (Three 94%).

“We’ve looked at consumers’ real-life experiences in the North West and found big differences in service between mobile phone providers. We want providers to publish the reliability and speeds their networks actually achieve so people can make an informed choice before signing on the dotted line.”

“We also support the Government’s action on mobile roaming to rid the country of unnecessary ‘not spots’, so that a lost mobile phone signal becomes a thing of the past.”

How heather could help to solve the UK’s energy needs