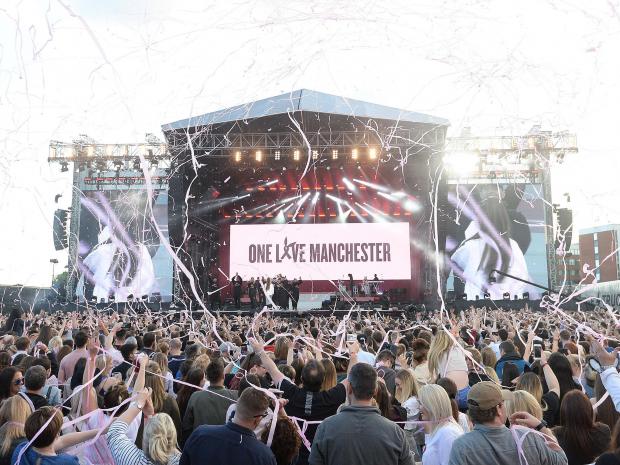 A 23-year-old man who was arrested in connection with the investigation into the attack at Manchester Arena has been released without charge.

He was arrested on Monday 29 May in the Shoreham-on-Sea area of Sussex.

A total of eleven men remain in custody for questioning.
Last night’s One Love concert at Old Trafford saw an estimated £2m in donations to the We Love Manchester fund for the victims of the terror attack.

Ariana told the estimated 50,000 crowd: ” I want to thank you for coming together and being so loving and strong and unified”

Among the highlights of the gig was surprise appearance from Liam Gallagher and the crowd singing Don’t Look Back in Anger, The Oasis classic as Grande joined Coldplay’s Chris Martin on stage.

The children of Parrs Wood High School Choir also took centre-stage with a rendition of Grande’s 2014 song My Everything.

The families of Chloe Rutherford and Liam Curry both killed in the attack have released a further statement:

The families of both Chloe and Liam would like to thank everyone who has supported them during this very difficult time.

We want to give special thanks to Greater Manchester Police, our Northumbrian Police family liaison officers and The Hilton Hotel who have shown nothing but kindness and resolve. To the nurses and British Red Cross we also extend our gratitude for supporting us during our darkest hours.

The past two weeks have been a parent’s worst nightmare as our children were taken from us much too soon. Finally after much heartache and sadness we are in a position at last to bring our babies home where they belong. We ask that in the days ahead the press show us the respect we deserve and the time to come to terms with the impact this horrendous crime has had on us as families.

We would at this point also like to reach out to those affected by the London Terror Attack, sending our love and condolences to those who have lost loved ones, our hearts are aching for your loss, may those injured have a speedy recovery.