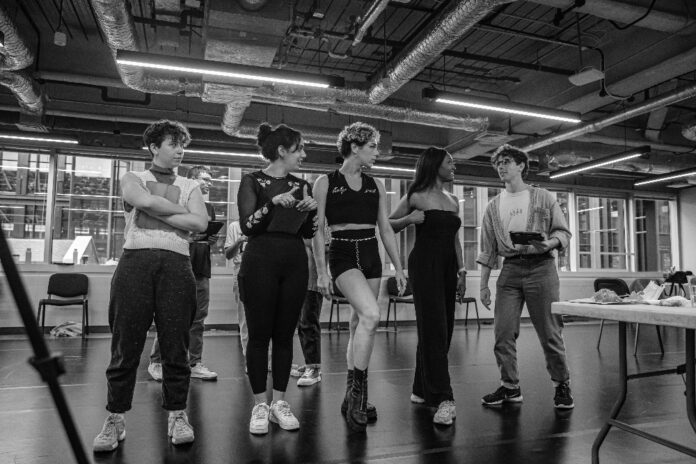 Following a highly acclaimed digital launch in 2020, Snowfalke premiers in a semi staged concert production as part of the Lowry’s Rewrites festival, produced by MPTheatricals in association with Grey Area Theatre.

Through the prism of social media, satire and song, Snowfalke is a kaleidoscopic musical navigating the tricky nature of sexual identity and community within the confines of modern millennial hood. What happens when the label you gave yourself no longer fits? Do you fight the confusion or embrace the ambiguity?

The first new musical from writer & actor Lewis Cornay will be workshopped at NDT Broadgate this September, before making its world premiere at The Lowry, Salford Quays as a semi-staged concert, headlining the Rewrites festival in October.

Rewrites is The Lowry’s regular platform for the development of new musical theatre, supporting artists and companies at all stages of their work – whether it is a short ten-minute preview, a work-in-progress or a premiere production having previously featured shows such as Operation Mincemeat, which started as a scratch event at Rewrites.

Writer & performer Lewis Cornay comments: ‘The journey to get this musical into a Real LifeE space has been a long one, so I’m ridiculously excited about working with this brilliant team of cast and creatives in bringing the show to life. I am so passionate about the themes of the piece and the story we’re telling, so I’m very interested to see how audiences respond!’

Matt Eames, Senior Producer at the Lowry, comments: ‘It’s a really exciting time for new musical theatre in this country. There have been some brilliant shows developed over the last 2 years and now it is time to celebrate them in theatres and with live audiences. Rewrites has already platformed some fantastic shows this year and I’m delighted to be working with this team to present Snowfalke’.

Thee workshop production stars Eve Norris as Jess, Rochelle Sherona (Joseph and the  as Megan, Isaac Hesketh as Olly, Roly Botha as Tyler, Phoebe Ellabani  as Chloe with Aitch Wylie  and Annie Southall  as Ensemble and Cornay as Tom.

Prior to each performance of Snowflake, three new musicals will provide a curtain raiser slot showcasing a ten minute preview of a show. These include Jude Taylor’s Is He Musical produced by MPTheatricals, Adrian Kimberlin’s The Stars That Remain produced by Exit Recording and Oliver Mills’ Mallory On The Mountain produced by Imaginality Productions.

SNOWFLAKE will premiere at The Lowry, Salford Quays from 14th-16th October, with a filmed production streaming from late October.

Tickets can be purchased at: https://thelowry.com/whats-on/rewrites-snowflake/.