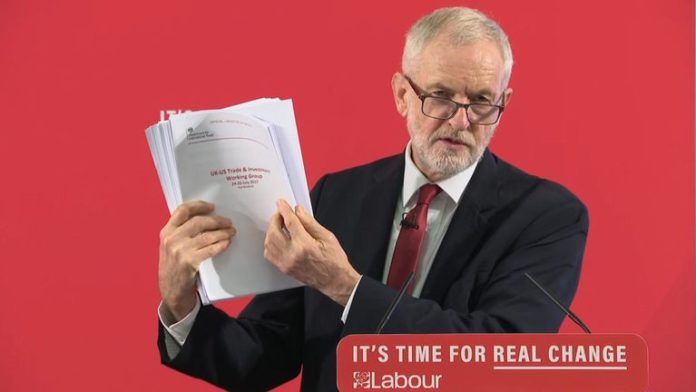 Jeremy Corbyn,  today revealed unredacted documents about secret US-UK trade talks putting the NHS on the table in any trade negotiations. Speaking at the press conference, he said:

If you watched the first TV debate between me and Boris Johnson, you’ll have seen me hold up these censored, blacked-out reports of secret US-UK talks about breaking open our NHS to US corporations and driving up the cost of medicines.

You’ll have seen Boris Johnson lose his cool, very angrily react saying it was “an absolute invention” and “completely untrue.”

He told the country there were “no circumstances whatsoever in which his government or any Conservative government” would put the NHS on the table in any trade negotiations.

What I have here is something I can reveal to you 451 pages of unredacted documents and information. All of it here.

Corbyn described the election as now a fight for the survival of our National Health Service.

He said the documents showed that big US corporations want to force up the price our NHS pays for drugs as part of the toxic deal being negotiated with Trump.

“President Trump himself never tires of complaining about what he calls the “unreasonably low prices” other countries pay for medicines. The White House even has a webpage attacking so-called “foreign freeloading” – that’s what they’re accusing our NHS of.”