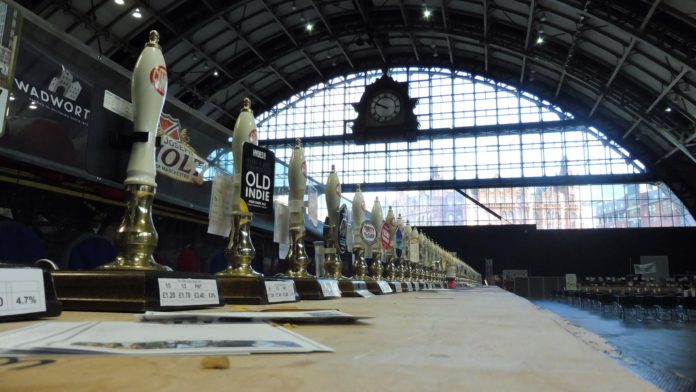 January may not be the ideal month for a festival to celebrate the best of British drinks. Alongside the traditional slew of New Year resolutions can be added the guilt-laden prohibition, Dry January, which worries brewers and licensees alike.

Add the uncertainties of current political machinations, a series of rail strikes affecting leisure travel and headlines warning of extreme weather. You’d be forgiven if you decided this really wasn’t time to put on the North’s biggest beer and cider festival.

But this is Manchester. And we do things differently here…

So the immense space at Manchester Central will again welcome an anticipated 15,000 people keen to sample some of the best and rarest traditional and modern beer and cider styles. Volunteer organisers from the Campaign for Real Ale (CAMRA) have planned this week’s event for the best part of twelve months, looking to improve the visitor experience by introducing new themed bars. But they are also keen to stress their main objective – to have fun.

Innovation runs through the lists of beers and ciders on offer, and 16 new beers will launch. Three new bars will make their debut, including Thornbridge, brewers of ‘Jaipur’, who will have their own brewery bar. The Beers From The Wood bar shows how brewers can marry the traditional wooden barrels with modern brewing recipes. Some like Wadworth and Theakston have retained the use of wood, while others have been persuaded by the festival to try old and new beers in oak, hickory and chestnut. There are plenty of rarities and new beers including West Cumbrian brewer Foxfield who has brewed ‘Dubbelwood’ especially for Manchester. A rare treat is in store for trade invitees to the preview on Wednesday afternoon when Master Cooper Alastair Simms will be demonstrating his craft.

The Gin bar is another new to the festival, showing organisers are not afraid to ruffle some feathers! It cannot compete with the huge variety of drinks at the other 23 bars, but 26 gins mainly drawn from Great Manchester distillers will give spirits drinkers scope to experiment and find new favourites.

It was several years ago the Manchester festival introduced keykeg beers and the choice now extends to the best modern keg styles popular with younger drinkers, and usually served colder than cask-conditioned beers. A dedicated modern keg bar is complemented by examples to be found on many of the thirteen brewery bars as well as the enlarged Irish bar. A partnership with The White Hag brewery in Sligo has provoked several Irish brewers from both sides of the border to provide some beers as cask-conditioned, still unusual across the Irish Sea. But as you’d expect from a festival with the CAMRA name attached, cask beers dominate with two huge main bars organised alphabetically by brewer, and the Hundred Club bar featuring family brewers who have always championed cask throughout their long histories. Popular local breweries JW Lees and Joseph Holt qualify for inclusion alongside familiar names such as Timothy Taylor, Moorhouse’s and Fuller’s.

The cider and perry bar will feature an increased selection of cider flavoured with real fruit which has proved popular with visitors. There’s a strong emphasis on ciders and perry from the increasing number of Northern producers, and a competition will run on Friday to judge the best cider and perry from the North of England. A late addition to the menu is the very unusual quince-flavoured cider, dubbed ‘Quider’, made in Holmfirth, West Yorkshire.

Foreign beer fans will not be disappointed with more than 40 draught beers from Belgium, the Czech Republic and Germany supplemented by bottles and draught from Japan, The Netherlands Sweden and the USA. The festival has again secured a number of Oktoberfestbier brews, a good choice for those who may have been raised on the usual UK bar top lagers. There’s also strong interest from the bar managers who have secured four Norwegian draught beers, including Lervig’s ‘Konrad Stout’, a 10.4% example.

There will be a selection of food traders providing everything from pickled eggs and pork scratchings to more substantial hot and cold street food. Traditional pub games always attract a crowd especially from a younger generation who may never have seen them at their local!Several leading experts will lead tutored tastings, and the Great Manchester Debate on Saturday will consider the future of cask beer. And a small selection of beer-related stalls will provide everything from inscribed glass and pewter personalisation to Viking drinking horns.

Festival organiser Adrian Saunders said: “We know we have a winning formula, evidenced by a 14% increase in attendance in 2018. But my team are not content simply to repeat the experience annually.

“So I’m really pleased to have a nod to tradition with the Beers from the Wood bar which will welcome visitors as they arrive. And we have another first for us, a Gin Bar which might attract a new group of festival goers to try our event.

“I want to thank our band of volunteers, drawn from the Greater Manchester branches of CAMRA with several from across the UK, and our sponsors who help keep the festival affordable. But most of all, thank you to all who come and enjoy themselves and make the Manchester Beer and Cider Festival an essential item in the calendar”.

The festival runs from Thursday 24th to Saturday 26th January 2019 at Manchester Central. Tickets for entry and special tasting events are on sale at the festival’s website, www.mancbeerfest.uk

1. The Manchester Beer & Cider Festival is organised by