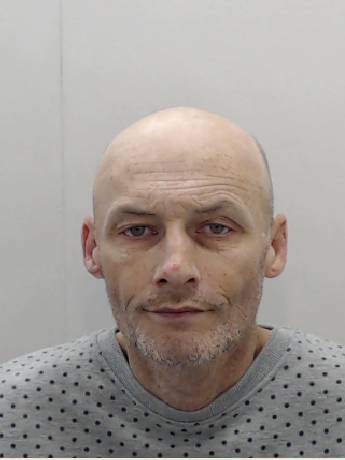 A man has been jailed after hiding his partner’s body in a house for more than a year.
Andrew Reade, 43, of Toronto Street, Bolton has today  been jailed at Bolton Crown Court for four years and four months after pleading guilty to preventing the burial of a body and perverting the course of justice at an earlier hearing.

In January 2017, officers launched a murder investigation after 44-year-old Vicky Cherry had not been seen for more than a year.

Her family had become concerned when they had uncharacteristically stopped hearing from her.

Reade had told people that he and Vicky had split up and she had moved to Blackburn. However, enquiries revealed that her employment support allowance was still being withdrawn in the Bolton area after the time that Reade claimed she had moved away.

This and other inconsistencies led officers to launch the murder investigation and subsequently execute a warrant at Reade’s house.

He was arrested on suspicion of her murder and, during a search of the house, officers sadly discovered Vicky’s body, which further enquiries established had been concealed in the house for more than a year.

When interviewed by police Reade denied murder but admitted he hid Vicky’s body after she died and had lied to her family and police about her whereabouts. He also admitted to taking her benefits for several months after her death.

A Home Office Post Mortem concluded Victoria’s cause of death was unascertained and that conclusions around injuries she had sustained were hampered by the decomposition of her body.

Speaking after the sentencing, Vicky’s family said: “We as a family are heartbroken. No matter what sentence Reade would have been given it will never bring Vicky back.

“He stopped us for 18 months being able to have her funeral from the day she died.

“Despite the sentence today we will never get over this and will live with this heartache for the rest of our lives.

“We would also like to thank Greater Manchester Police for their thorough and hard work throughout the investigation.”

“The strength and courage her family has shown throughout the investigation and the time in court is truly commendable.

“They have not only lost a daughter, mother, sister and friend, but been put through a tremendous amount of heartache and my only hope is that today closes that chapter in their lives so they are able to move forward while remembering the happy memories they created when Vicky was alive.”

Police find Cocaine and Heroin worth £500K in a Rochdale container