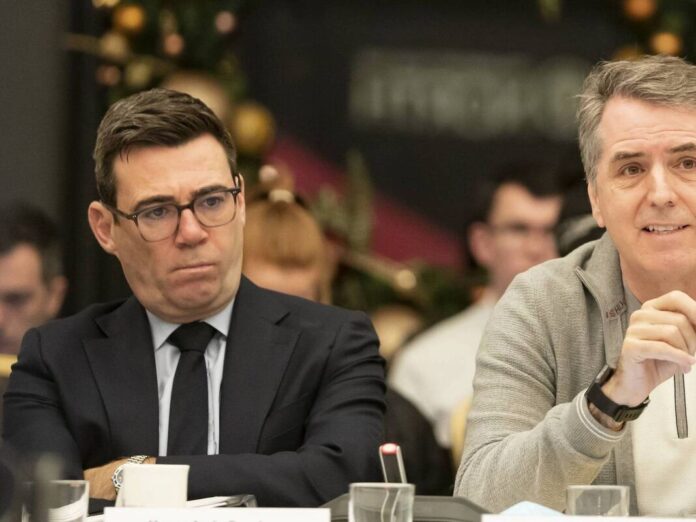 Minister for Foreign Affairs Simon Coveney, TD, Mayor Andy Burnham and Mayor Steve Rotheram agreed to further develop the partnership between Ireland and the Manchester and Liverpool city regions during a meeting in the Department of Foreign Affairs, Dublin, on 29 March.

The meeting was part of major joint mission to Ireland led by the two mayors, involving business delegations and civic leaders, which is backed by the UK Department of International Trade.

The mission will advance the respective International Strategies of Liverpool City Region and Greater Manchester Combined Authorities, both of which identify Ireland as a priority strategic partner and commit to strengthening mutually beneficial trade and innovation linkages, centred on the Irish Sea.

The mission to Dublin also supports Ireland’s objective of developing its partnership with the North of England. It follows the official opening by Minister Coveney of Ireland’s new Consulate General for the region in October 2021, recent visits to the region by Ministers Robert Troy and Sean Fleming and the establishment of an Enterprise Ireland Office in Manchester in 2019.

In welcoming the mayors, Minister Simon Coveney spoke of his determination to continue to build up Ireland’s engagement with the North of England:

“The development of our partnership with the North of England is a key part of Ireland’s strategy for strengthening relations with Great Britain post-Brexit. We have unique heritage and community ties right across the North of England and there is great potential for Irish firms to develop partnerships with the dynamic Northern Powerhouse region. I know from Team Ireland’s Consulate General and Enterprise Ireland operation on the ground that our commercial, environmental, civic and cultural objectives are aligned with those of many of the region’s powerful new Combined Authorities.

Mayor Andy Burham and Mayor Steve Rotherham worked with me on the opening of our Consulate General for the North of England last year and this week’s mission is another important step forward. Our respective commitments to the relationship are clear.

As part of our strategy for the North of England, my Department and our new Consulate will continue to explore opportunities for further strategic engagement in the tourism, academic, sustainability, cultural and sporting sectors, and in particular promote two-way commercial opportunities across the Irish Sea. We will encourage greater collaboration between town, city and other local, regional and community organisations on areas of shared interest for the mutual benefit to our people and places. High-level visits such as these are important and will continue to be supported.”

“It is fantastic to be in Dublin, where we have been given a typically warm Irish welcome. It is clear from our conversations so far that our region’s special relationship with our nearest neighbour is as strong as ever.

“Andy and I arrived here with the ambition to lay the foundations to ensure that the latest chapter in our long shared history is a prosperous one. All the conversations we have had so far this week indicate that this feeling is very much mutual.

“The North West has enjoyed a long, successful trading partnership with Ireland. Looking to the future, we share many of the same aims in things like renewable energy, innovation, trade, and manufacturing. There is still so much potential to unlock and we want Ireland to be near the front of that queue.”

“Ireland holds deep significance for people across the North West which is why I’m so pleased to be leading this first joint Mayoral mission, together with Mayor Steve Rotheram.

“There are so many opportunities for us to work together on vital issues like recovering from the pandemic and cutting emissions to meet our net zero goals. Together our businesses can grow, invest, and create good jobs on both sides of the Irish Sea

“Minister Coveney shares our determination to deepen collaboration and cooperation between our places and this agreement will help us to take that next step forward.”