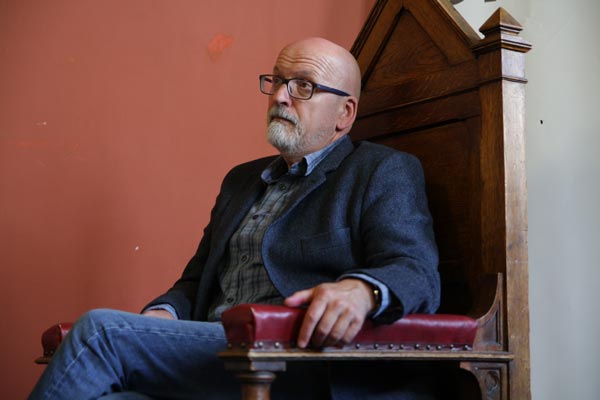 We spoke to Roddy Doyle as he prepares to embark on a tour of UK and Ireland commencing this Sunday (8th March) at HOME in Manchester.

His many awards include the Booker Prize for Paddy Clarke Ha Ha Ha (1993), the Irish PEN Award (2009), and the BAFTA Award for Best Adapted Screenplay for The Commitments (1991).

What was the motivation behind this tour?

Literary festivals have become a big a big thing in the cultural calendars of towns and cities over the last few years, particularly around Britain and Ireland. I’ve been to a fair few and there is an appetite for them, people seem to enjoy listening to writers and about writing, which mystifies me a little because it’s the last thing I would like to do, sit there and listen to writers talk about writing.

The people at my agency had been to a few of my events and they had thought they were good and I’m very comfortable talking about writing. Maybe that’s because I used to be a school teacher. So they easily persuaded me to do this tour in ten different towns and cities in Ireland.

Also, I’ve written 12 novels and I’m more comfortable looking back on the old work now than I used to be. I used to run away from it. It feels good to look back now, whereas it used to feel as though I was dining out on the past a little bit.

Is there anything in particular that made you feel like you could now look back on your work?

In recent years I adapted ‘The Commitments’ into a stage musical and that involved reading the book for the first time since I wrote it.

It felt very refreshing, it felt familiar and unfamiliar at the same time. Because I was 27 when I started writing that book. It may have been a long time ago but it still felt like something that came out of my head.

More recently I adapted my second book ‘The Snapper’ for the stage in Dublin and that has been a great experience. To see how the audience responds to something I wrote in the ’80s as if it is still current and fresh has been very joyous.

So in that way, I think I have become more comfortable looking back on the past.

What should people attending the show expect?

Well, there’s the thing, it will be a little bit unpredictable because it will be a different person speaking to me in each city. I think that’s a great thing. So I won’t know what they are going to ask.

I’ll be reading from ‘Paddy Clarke Ha Ha Ha’, ‘A Star Called Henry’, ‘The Woman Who Walked Into Doors’ and my new novel which is called ‘Love’.

I suppose what will happen will be a long conversation really. I’m asked a short question and I will give a long answer. I don’t believe really that unless it is fundamentally yes or no I really like to give a full answer to any question I am asked.

And I believe it is very entertaining and I can be quite funny and people who are interested in the whole what makes a writer a writer might get a lot from it.

You have had a long and successful career, what was the driving force that made you follow the path to become a writer?

I never saw it as a path really. I think once I got into the habit in my early 20’s. When I started writing it occurred to me pretty quickly you really have to go at this as often as you can.

I was a secondary school teacher. So I was working full time but I began to realise I have to do this every night and if not every night at least as often as I can. I have to use the weekends, I got a lot of holidays. Irish teachers get a lot more holidays than British teachers even though do quite well.

I had a lot of months really to work and I realised a big part of the job that gets ignored is time. The willing to sit there and work by yourself in the knowledge that perhaps nobody will want to know what you are doing. And you have to have a certain bloody-mindedness about it.

So once I got into that I began to feel, particularly when I started to write ‘The Commitments’, I’m doing something different here. I’m presenting a story in a way it hasn’t been presented before as far as I know and that felt quite exciting. So over the years and only recently it has occurred to me that I write because I have to. I don’t seem to have a choice. Obviously I have a choice if I work today, tomorrow, this year I had January off, I didn’t do any work whatsoever.

I feel compelled to write because there are things I want to write about.

Is there a moment in your career that you would consider your defining moment?

There was, years ago, in 1986 when I was in my bedsit writing ‘The Commitments’ and I decided to introduce an older character into the story.

What I often did was look in the Dublin Area Phonebook and go through the names and I would combine a first name with a second name. And I gave the character a nickname and I remember thinking this is great, I’m on to something here.

Even just naming the band and giving them all a nickname which I did in a couple of evenings while I was writing. That felt like not just a new battery into a machine but actually putting the right battery in.

So that is as near to a defining moment I can think of.

I think the broadcasting of the TV show ‘Family’ in 1994 hardened me a lot. Because there was a huge reaction to it in Ireland. A lot of it unfavourable. I’m glad now that social media didn’t exist then. It would have gone haywire! I had death threats and really unpleasant letters. But it made me feel like this is what I want to do.

Over the years has your writing style changed?

Yes, it has. I think it has changed as I get older. It doesn’t mean I can’t write about younger characters but it is interesting as you age and the angle that you look at it. A bit like a camera changes.

I remember when I was writing ‘Paddy Clarke Ha Ha Ha’ I was bringing my children who were just babies through our house and it was the house that I grew up in. I went into the kitchen and the kitchen had the same dimensions. I got down on my knees to remind myself of what it looked like when I was ten. Only for a minute or so and there was an interesting thing to do.

The place was so much bigger. I remember the old fridge and having to put my hand up to the handle instead of down to it. So it was a really interesting thing to do, in that sense I recaptured the sense of being a ten-year-old boy twenty years after.

Now being a man in his 60’s you look at the world differently. My children are adults. That relationship with them is very different. You look back a lot more because a lot more living jas been done.

One of the things I would always be anxious about is repeating myself. I’m relatively prolific I think, there has been a couple of occasions where I have started a short story and I think to myself I’ve said this before. Or I have a character say something and I think, I’ve had a character say that before.

The tour comes to Manchester on Sunday, what do you think of the city?

I have visited a few times before. When I was writing the book for Roy Keane I was there every other week to work on it. I became a regular visitor to Manchester.

I like Northern England in general, but there is something about Manchester. I think it’s a modern city which manages to make most of its recent and older history.

You are never far from musical thoughts when you are in Manchester.

Finally, what advice would you give to an aspiring writer?

Then when you have a bit done start getting fussy. Try to make sure there isn’t somebody over your shoulder, real or imaginary, tut tut-tutting. Make sure you are literally alone. Just do it.

Roddy Doyle will be at HOME, Manchester on 8th March with his show ‘Conversations With Roddy Doyle’. Tickets available here.