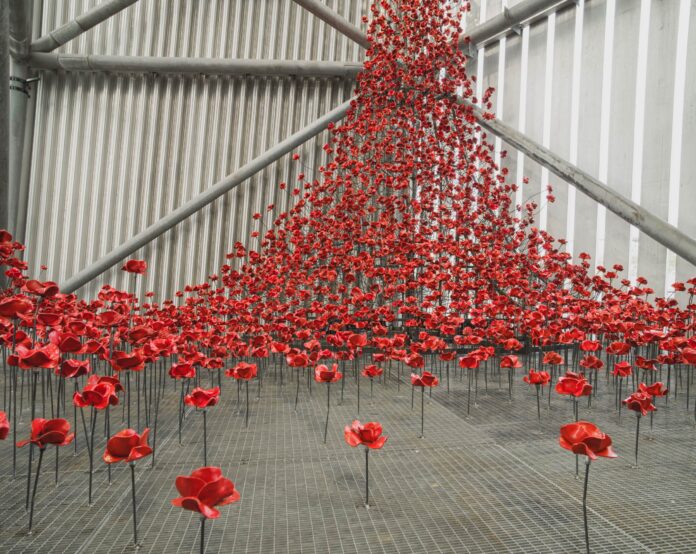 Following the success of Poppies: Wave and Weeping Window, which toured to IWM London and IWM North in 2018 to mark the end of the First World War centenary, the iconic sculptures have been combined and returned to IWM North, where they are on permanent display as part of a brand new artwork.

Reimagined into a dramatic new sculptural form, Poppies is displayed within the unique architecture of IWM North’s Air Shard, opening to the public from 10 November 2021.

Poppies: Wave and Weeping Window were originally part of the installation Blood Swept Lands and Seas of Red – poppies and original concept by artist Paul Cummins and installation designed by Tom Piper – by Paul Cummins Ceramics Limited in conjunction with Historic Royal Palaces.

The installation was originally at HM Tower of London from August to November 2014
where 888,246 poppies were displayed, one for every British or Colonial life lost at the Front during the First World War. Poppies: Wave and Weeping Window travelled to 19 locations around the UK between 2014 and 2018, with Wave concluding at IWM North and Weeping Window concluding at IWM London.

This major four-year tour encouraged millions of people across the country to reflect on their own links to the First World War as a shared experience.

The sculptures now form part of IWM’s collection and, in their new permanent home, visitors to Manchester are invited to reconnect with the poppies as both a contemporary artwork and as a means by which to reflect on the way war shapes lives.

Poppies were a familiar sight on the battlefields of the Western Front, where they flourished in the devastated landscape. Since John McCrae’s 1915 poem In Flanders Fields, which concluded with the lines ‘We shall not sleep, though poppies grow / In Flanders fields,’ the poppy has endured as a symbol of remembrance. Poppies, which cascades 30 metres down and pools within the Air Shard, will help visitors to refresh their understanding of the poppy as a symbol ofthe very human cost of war.

Laura Clouting, Senior Curator of First World War and Early 20th Century at IWM, says, “It feels really fitting to have the poppies return and make their home at IWM North. IWM was founded over a century ago amidst the First World War to ensure that we never forget the human cost of war. This sculpture, both an artwork and a piece of social history, provides visitors with the opportunity to consider these consequences of war afresh.”

The unveiling of Poppies at IWM North coincides with Remembrance Sunday in 2021 and is
accompanied by Remembrance themed programming across the museum’s branches and
online. This will include IWM’s annual Remembrance Debate, in partnership with BBC Radio 3’s Free Thinking, and Breaking the Silence at IWM London and IWM North.

IWM’s annual Remembrance Debate, in partnership with BBC Radio 3’s Free Thinking, will see apanel of historians and activists explore the impact of the words we use to describe conflict.

Together, they will question what and who shape the language we use, whether terms are static, and what difference that makes to public perception and Remembrance. Chaired by Free Thinking’s Presenter Anne McElvoy, this year’s Debate – How do we define a War? – will be broadcast by BBC Radio 3’s Free Thinking at 10pm on Tuesday 9 November 2021. It will be available on BBC Sounds and as a BBC Radio 3 Arts & Ideas podcast.

A two-minute silence will be observed across all five of IWM branches on Remembrance
Sunday at 11am, with Ceremonies of Remembrance taking place at IWM London and IWM
Duxford on 14 November. The Ceremony at IWM London will commence with a violin recital by a young musician supported by Lambeth Music Service, on a violin made from sycamore and pine trees that grew in the former battlefields on the Western Front. The two-minute silence will then follow.

At IWM Duxford, the two-minute silence will be followed by a poppy drop from a historic
aircraft. Please note that on Remembrance Sunday, HMS Belfast will open at the later time of 11.30am due to a private annual Remembrance service. IWM London, IWM Duxford, IWM North and Churchill War Rooms will observe usual opening hours.

At 11.02am the silence will be broken at IWM London and IWM North. Working with The Midi Music Company at IWM London and ThickSkin at IWM North, Breaking the Silence will see groups of young people, aged 11 to 18, premiere brand-new performances exploring what contemporary Remembrance means to them.