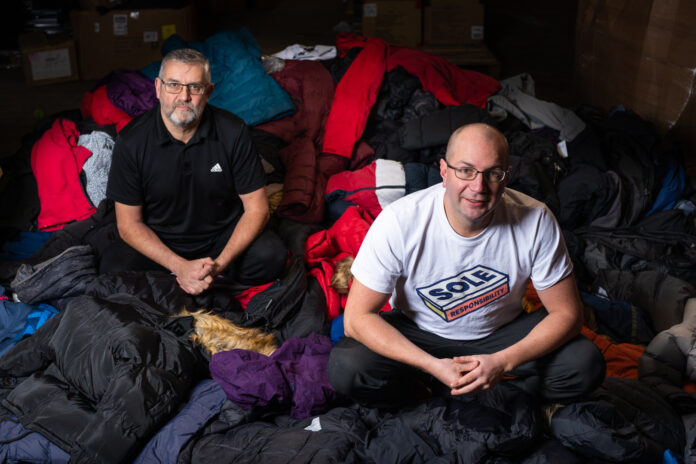 A businessman has pledged 600 winter coats and jackets, worth more than £15,000, to homeless people in Greater Manchester – vowing that every rough sleeper in the city and surrounding areas will have a coat by Christmas.

Simon Payne, founder of Sole Responsibility – a business which buys and sells branded seconds and stock with minor damage from some of the UK’s leading retailers which would have been destined for landfill or incineration – has pledged the winter clothing as growing numbers of people in the region find themselves homeless or in poverty due to the pandemic.

Simon has joined forces with charity support worker, John Shaw, who provides on the ground support to Greater Manchester’s network of hostels, street kitchens and asylum seeker support groups to urgently get the clothing to people who need it the most.

With night-time temperatures creeping down towards zero degrees, the entrepreneur is now urging retailers and clothing brands across the UK to consider how they too could release seconds stock this winter.

Speaking about the Manchester donation, John Shaw, said: “I’ve been working with charities across Manchester for many years and this year has been one of the toughest yet. Covid has had a far reaching impact and the number of people homeless or living in poverty in this city has grown exponentially. The restrictions caused by the pandemic has put people working in the hospitality sector, especially, on a cliff edge. They were suddenly out of work and evicted from their homes due to no income and a lack of tenancy agreement. It’s a sad reality to see people hit so hard that they end up homeless and living on the streets.

“In these colder and wet months we see thousands of people sleeping on the streets – many of which refuse additional support because it has become such a way of life. To stay alive they need food and warm, dry clothing. The winter coats, as well over 1,000 boots which Simon also donated a few months ago, will go a long way to helping prevent them from losing their lives this winter.”

“We want to get to a point where there’s not one homeless person on the street of Manchester who hasn’t got a coat and a pair of winter boots. This donation gives these people something tangible that will make a real difference – not currency that can be stolen or sold for drugs. The clothing is hard wearing and high quality and should see them through some of the toughest conditions this winter.”

Simon Payne, founder of Sole Responsibility, said: “As a business, charity has always been at the very heart of what we do and we allocate at least 10% of our stock to charitable causes. This winter we have noticed a huge step change in demand for support as the social and economic impact of the pandemic takes its toll. We have received enquiries and calls for help from all across the UK and it is becoming increasingly clear that there is a growing need for donations to help people through the next few months.

“What many people may not realise is that clothing retailers and manufacturers have ex-display, damaged and returned stock which is often sent to landfill or incinerated because it isn’t commercially viable. Not only does this have a devastating environmental impact, but these goods could in fact be diverted to a better use – such as those in need, especially at this time of the year when it is needed the most.

“I set up Sole Responsibility in 2014 to work with the fashion industry – providing an ethical and sustainable route for subprime products to be sold to consumers or donated. For the past six years I have been working alongside some of the UK’s leading footwear and clothing retailers to divert goods that they deem unsaleable – changing the perception of this subprime stock by selling it as second and returned stock direct to consumers through an eBay shop front. Our business has the full infrastructure in place to handle volume from retailers and distribute to charities.

“CSR has always been at the forefront of our business and as temperatures plummet and we head towards the depths of winter, I’m now urging retailers to consider how they could make a tangible difference by doing something responsible with stock that cannot be sold. By working with a business such as mine, this small action could make a huge difference to people’s lives this winter.”

Dame Sarah Storey To Get 50,000 Women In The Saddle With New Cycling Campaign