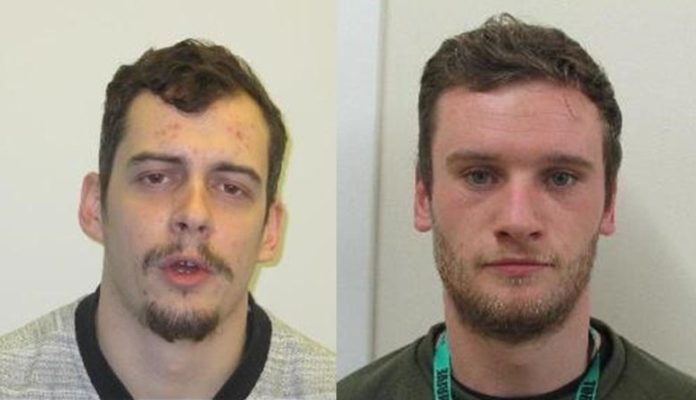 Kyle Meighan, 27 and Jack Thompson, 24, both from Salford, absconded from HMP Kirkham on November 4.

They are believed to have left the prison together and could have travelled to the Greater Manchester area.

Police have been conducting a number of enquiries since they went missing including address checks and other lines of investigation, but have yet to find either man.

Meighan was jailed in January 2017 at Minshull Crown Court for seven years and six months for offences including robbery, burglary and drugs supply.

He is described as white, 5ft 11in tall, of slim build with brown hair and eyes. He has scars on his left and right hands, as well as his right shin.

Thompson was sentenced to six years in prison at Minshull Crown Court in July 2017 for offences including robbery and possession of an offensive weapon.

He is described as white, 5ft 9in tall, of medium build with brown hair and blue eyes.

Both men have links to the Greater Manchester area and could be violent if approached.

A Lancashire Police spokesman said: “We are keen to find both men as soon as possible.

“It is believed they could have travelled to the Greater Manchester area and we would urge anyone who knows where they are to come forward.”