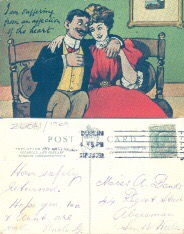 Research into postcards from the Edwardian period has revealed that they are the equivalent to today’s Facebook, Twitter and Instagram.
Manchester Metropolitan University’s Professor Nigel Hall has been working with Lancaster University’s Dr Julia Gillen and researchers at Lancaster’s Literacy Research Centre to identify and transcribe the postcards to create an online database.

Although postcards were not limited to 140 characters, they were quick and informal ways of contacting friends and family, with a snappier style of communication. Many postcard messages were only a few sentences long – very different from the formal and conventional letter writing of the day.

Pictures were also a major part of the postcards and popular images included animals and Edwardian celebrities.

The rail system allowed almost ‘instant messaging’ as postcards could travel across the country extraordinarily quickly and there were several deliveries a day.

Dr Gillen said: “Investigating the cards, we have uncovered some amazing tales and glimpses into everyday lives. It really was a snapshot of what the people saw and experienced at the time.

“Postcards were used for all purposes, not just holidays. People used postcards just as they use social networking platforms and text messages today. Wherever they were, they bought, commissioned or created their own artwork on postcards and sent them off in the knowledge they would reach their recipient within hours.”