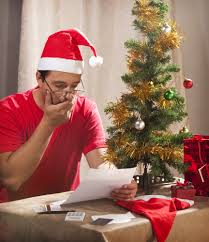 An estimated 7.9 million people are expecting to fall behind with their finances this January as a result of Christmas costs, according to new research published by National Debtline, run by charity the Money Advice Trust.

The free debt advice charity has today joined with the Association of British Credit Unions (ABCUL) to issue a call for households to ‘make a plan’ for next Christmas.

The poll of more than 2,000 British adults, conducted by YouGov for National Debtline, found that 16 percent of Britons say they are likely to fall behind in January as a result of Christmas spending, an increase from 11 percent last year and equivalent to an estimated 7.9 million people. The findings come after 37 percent of Britons said they were putting Christmas presents on credit.

More than half of Britons (55 percent) said they had not saved for Christmas before December arrived, with only 14 percent reporting they had started saving up for the extra costs of Christmas before last summer.

Nearly a quarter (23 percent) say they are likely to start saving for Christmas earlier than they did last year – a figure that National Debtline and credit unions say should be much higher.

“After the celebrations of the Christmas period, January is a challenging time for many households with the impact of festive spending taking its toll on household budgets. With millions expecting to fall behind with their finances in January, we want people to be financially prepared for the year ahead.

“At the start of this New Year, when resolutions are being made, I would encourage everyone to look at their personal finances and make a plan if they can for 2018 – set a household budget, look at joining a credit union in preparation for next Christmas and seek free advice at www.nationaldebtline.org if you are struggling to cope.