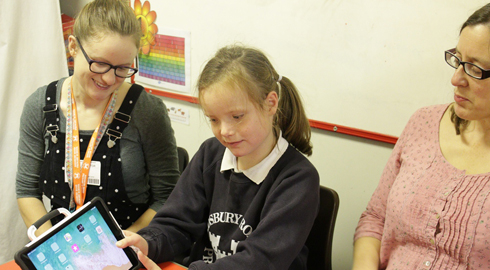 Stockport’s speech and language therapist (SLT) services have supported a young girl in finding her voice, with the help of the latest technology in communication aids.

10 year old Hester Lynch lives with her family in Heaton Moor. Hester is a friendly, lively and enthusiastic girl who has always been keen to get to know people, but who has always had difficulty communicating.

She has Gatad 2B syndrome, a very rare neurological disorder whose symptoms include intellectual difficulties and severe speech impairment. Until recently, when Hester was speaking, it was very difficult for other people to make out any individual words which she spoke.

The Stockport SLT team have supported Hester for a long time and have helped her to communicate in other ways. As a result of their referral to the ACE Centre North, in 2016 Hester was provided with a Proloquo2Go communication aid, which has made a dramatic difference to her communication skills.

The Proloquo is a programme used via I-Pad which is tuned to the needs of people who have trouble talking. It has a series of icons and words which Hester can tap to make the system say the words. It does more than just speak on her behalf: with the support of the Stockport SLT team it has helped her to de-code language and has actually given her the confidence and the ability to speak much more clearly herself.

The SLT has encouraged Hester to use ‘total communication’ techniques. Targeted exercises toned oral musculature and developed breath control to improve speech clarity. Hester was encouraged to vocalise and sign and to use her communication aid. Over the past 6 months or so there has been a dramatic improvement in her spoken language and she can now finally say many words out loud in a way that unfamiliar people can understand.

Whether it’s speaking in class, joking with teachers and friends, or just talking about her love of football, Hester can now make herself understood much more clearly, which has helped to expand her range of communication partners.

The Proloquo2go programmes and I-pads have been supplied to the team by the Ace Centre charity, which have been helping other SLT teams across Greater Manchester as well.

Hester’s mother, Lucy Powis said “Hester’s speech has come on in leaps and bounds, so that even people she doesn’t know, such as children she’s playing with in the park, can now understand her. She’s a lot more confident in herself now and it’s all thanks to the speech and language team, the Ace Centre and the Proloquo, so we’d like to say a big thank you to them all.”

Speech and language therapist Pamela Barr said “The Proloquo has been a big help for Hester. Using it together with our total communication techniques it’s been marvellous to be able to give Hester a voice, and we’re using it to help us give a voice to many other children too.”

The Stockport SLT service teams provide support for over 2000 children, helping them in community settings across the local area.

New Survey Exposes Sauces and Marinades can have up to ten times as much...

Charity plans to install dispensing machine for homeless in Manchester