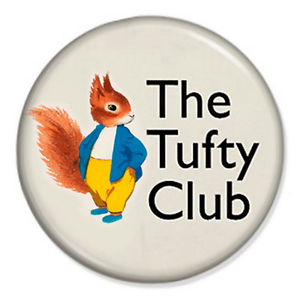 Tufty Fluffytail, the iconic and much-loved red squirrel who was instrumental in helping millions of children to learn about road safety from the 1950s-1990s, is celebrating his 65th birthday.

Created in 1953 by Elsie Mills MBE, who worked on child safety initiatives at the Royal Society for the Prevention of Accidents (RoSPA), Tufty helped to communicate simple safety messages to children across the UK.

In 1961, his influence was cemented through the formation of the Tufty Club – a nationwide network of local road safety groups for children. At its peak, there were 24,500 registered Tufty Clubs, with membership passing two million children in 1972.

Tufty’s image was changed to keep up with the times in 1979 and again in 1993, before new methods of helping children to learn about road safety came to the fore. In 2007, Tufty once again rose to national prominence when he made a guest appearance in the cult BBC series Life on Mars.

Errol Taylor, chief executive of RoSPA, said: “Tufty’s legacy lives on through the messages that we continue to receive from former members of the Tufty Club, telling us of the impact he had on them and, for many, how they have used their memories of Tufty to talk to their children and now their grandchildren about road safety.”

Like many in his generation, Tufty has not retired – his image currently features on RoSPA’s Keeping Kids Safe packs for families with under-5s and he was also the subject of some safety activities for children at an exhibition to mark the safety charity’s centenary last year.

Errol Taylor said: “We’re looking forward to continuing to work with Tufty to raise awareness of some key safety challenges. That he has reached the age of 65 is particularly poignant because over-65s are among the groups most at risk of being seriously injured in accidents, especially from falls in the home, and they are a key priority group in the recently-launched national accident prevention strategy for England.

“People are increasingly seeking information about how they can age well to enjoy a productive and independent healthy older life, and there is a real opportunity to promote ageing as a good news story. Among the strategy’s recommendations for the over-65s age group are: continued action on falls prevention; the development of local partnerships that address multiple safety, health and wellbeing issues such as fire safety, falls prevention and social isolation; and the promotion of self-assessment tools to enable older drivers to think about how they can drive safer for longer. We are also working with employers to promote sustainable working lives and some firms are beginning to develop carry-over programmes that take safety learning from the workplace into other parts of life, especially on falls prevention.”

From Ten Acre to Pudsey