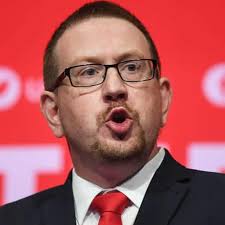 Labour’s shadow community secretary and Greater Manchester MP Andrew Gwynne has acknowledged that his party has a problem with anti semitism.

The remarks came as his leader Jeremy Corbyn prepares to meet Jewish community leaders this evening in the face of much criticism of his party’s dealing with its anti Jewish sentiment.

In an interview on this morning’s Today programme on Radio Four, the MP for Denton and Reddish added that the party must work to rebuild trust with the Jewish community.

However on the same programme,  Holocaust survivor Susan Pollack called for Mr Corbyn to show leadership in tackling anti-Semitism.

“He has to act and he has to show his leadership, and then I think that’s the only way we will have respect,”

Asked if Mr Corbyn had shown leadership on the issue, Mr Gwynne sidestepped the question, saying: “I think what we have now got to do – and we have got an issue in the Labour Party – we have got to acknowledge that that problem exists and, for some, that is a challenge.

Creative organisations warn Treasury of devastation of the performing arts and exodus of talent...