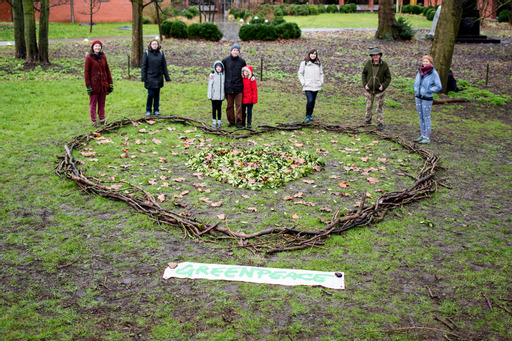 Greenpeace Manchester Group created a giant heart in Whitworth Park, as part of the Climate Coalition’s annual Show the Love campaign, which shows what people love and don’t want to lose to climate change. The heart was created from branches and leaves found in the area, people of all ages came together to create the natural art work and reflect on climate change.

Later that day. volunteers braved the Manchester rain and carried out a community clean in the park and collected rubbish.

Greenpeace Manchester volunteer, Emel, said “It was brilliant to join with other people in Whitworth Park to show what we love and don’t want to lose to the climate crisis. Greenpeace Manchester are calling for the UK Government to invest further in green public transport, walking and cycling as one of the most important ways to reduce our emissions locally and protect our park and city. In the short-term, we need a tax on oil and gas companies, so that the money can be used to help people who are struggling to pay their bills due to the energy price rise.”

Martin Porter, group leader of Greenpeace Manchester said “Our international team of about a dozen volunteers, young and old, braved the rain to make the heart out of sticks and leaves we found in the park. We were watched by people enjoying the cafe in the Whitworth Art Gallery, we wanted to show our love for the Earth and to call on urgent action to deal with the climate emergency and the biodiveristy loss crisis. We then carried out a community clean removing three bags of litter, mainly single-use plastic bottles and packets. The team left the park in better condition than they found it, which is how we should be treating the planet. It’s essential that we reduce the amount of single-use plastic we produce in the UK, to help keep our local area clean, and to reduce the amount of energy we use in producing and dealing with throw away plastic.”

Greenpeace Manchester is calling on the Government to implement a Just Transition away from fossil fuels to renewables, to roll-out a nationwide programme to make people’s homes warmer and more energy efficient and to invest in green public transport, walking and cycling. Greenpeace volunteers also want to see a reduction in single-use plastic of at least 50% by 2025. In the short-term, we also need a windfall tax on big oil and gas companies, so that the money can be used to help people who are struggling to pay their bills due to the energy price rise.

Matt, a regular Greenpeace volunteer added ‘The climate crisis can feel scary, but for me, taking part in Show the Love is a really powerful way to come together with other people in my local area to call on decision-makers, from Manchester Council to the UK Government to actually deliver on our legally-binding climate targets and create a better, fairer, greener world for everyone.’