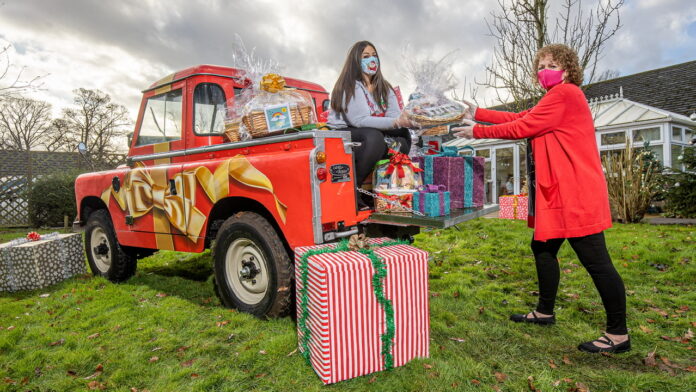 Sharon and Nigel Mather, from Bowdon, who won £12M in 2010 and Jane Wyatt, from Manchester, who scooped £1M in 2016, joined a Christmas elf ‘hamper task force’ – together with other National Lottery winners from across the region – and all from the comfort of their own homes due to current restrictions.

The winners have created more than 100 hampers packed with goodies as a thank you to the carers from Age Concern Central Lancashire who have all worked so tirelessly throughout the pandemic.

Sharon said, “The efforts these carers go to, so selflessly and the sacrifices they make every day, to care and love, is incredible. I was absolutely thrilled to be involved in such a heart-warming project to say ‘thank you’ and show our appreciation for all they do.

“I absolutely love Christmas and thoroughly enjoyed creating the hampers. We all need a bit of festive cheer at the moment so it was fantastic to be able to help make Christmas arrive early!”

The winners, who would normally be brought together by The National Lottery in the run up to Christmas to help support various charities, adapted to the current lockdown by creating a Whatsapp group so they could work from their own homes but share ideas and creations with each other as they made their hampers.

Also joining the festive task force were some of the region’s other biggest lottery winners, including Michele and Kevin Jones, from Crewe, who won £6M in 2016.

The hampers, after being quarantined, were delivered to Age Concern Central Lancashire’s Dementia Day Support Centres in Bamber Bridge and Fulwood Preston, aboard a fabulous festive truck.

Set up in 1981, Age Concern Central Lancashire, which marks its 40th birthday next year, is dedicated to helping people across the county to live well and age well.

The charity provides a wide variety of services including help at home and within community settings, dementia care and programmes to combat loneliness and isolation.

Suzanne Carr, CEO at Age Concern Central Lancashire, said, “Our family carers are at the core of our charity – they embody everything that we are passionate about and we’re incredibly proud of how well they have adapted over lockdown, overcoming the many personal challenges that carers often face on a daily basis.  They are unsung heroes!

“We’re extremely honoured to be chosen by National Lottery winners to receive these beautiful festive hampers and we know that our fantastic carers will truly appreciate a spot of early Christmas joy!”

The support these winners are giving Age Concern Central Lancashire comes as The National Lottery teams up with ITV to encourage people to volunteer in their local community.  ‘Miss Out To Help Out’ is a new campaign and website where anyone in the UK can get hints and tips on how to get started as well as information on volunteering opportunities nearby from charities and organisations.